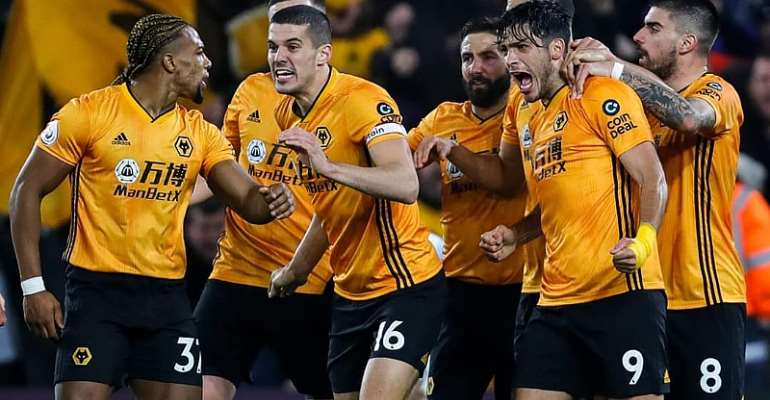 Matt Doherty's late winner meant Wolves are only the second team to complete a league double against a side managed by Pep Guardiola, after Chelsea became the first in 2016-17

Wolves fought back from two goals down to beat 10-man Manchester City in a memorable and controversial Premier League encounter at Molineux.

City looked as though they would make light of the 12th-minute red card shown to goalkeeper Ederson for a foul on Diogo Jota when Raheem Sterling scored twice.

The first came after two dramatic interventions by the video assistant referee, one to award City a penalty, then rule a retake, both of which Rui Patricio saved before Sterling tapped the rebound from the second kick into an empty net.

But Wolves, roared on by a passionate crowd, levelled through Adama Traore and Raul Jimenez before Matt Doherty won it with a shot from the edge of the area in the final minute.

The result leaves City in third place. 14 points behind Premier League leaders Liverpool, who have a game in hand.

There were jubilant scenes among the home fans at the final whistle - but the match was overshadowed by an incident which saw objects thrown from the stands as City celebrated their opener.

It seems certain that will lead to further action, as a public announcement needed to be made warning supporters that charges would be brought against anyone caught on CCTV committing an offence.