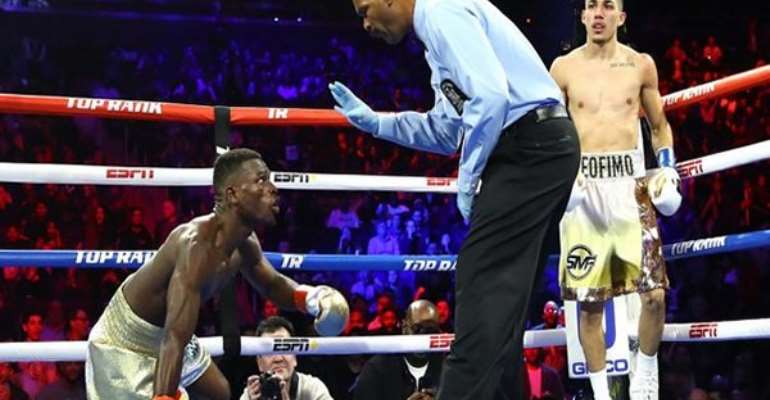 Boxing legend Azumah Nelson has tipped the recently dethroned International Boxing Federation (IBF) lightweight champion Richard Commey to bounce back from the "mistakes" which cost him the world title.

Commey lost the strap in dramatic fashion when he was stopped by Teofimo Lopez Jr in the second round of their world title clash on Sunday, December 15, 2019.

Contributing to the post-mortem of Commey's loss, Azumah said the former champion (29-3, 26 KOs) made the mistake of rushing from the canvas too quickly when he was dropped by Lopez Jr's damaging right hook, which signalled the end of the bout.

The former three-time world champion explained that as a boxer, being caught out by a good punch felt like a jolt of electricity passing through your body and the only option was to use the referee's mandatory eight count to shake-off the after-effects.

"He [Commey] made a mistake and he crashed with a punch; he went down and he's supposed to stay down for a while. He has about 10 seconds to stand on his feet. When he went down, he just rushed and got up. I have been telling people that a punch is like an electric shock, you know. When electricity shocks you, you will go down and when you go down, you have to wait for a while for the power to go off but when the power doesn’t go off and you wake up, you will fall down again. That's the mistake that he (Commey) made."

Azumah who himself came back from a loss to reclaim the World Boxing Council World Super Featherweight title against Jesse James Leija in 1996 stressed that if Commey's corner had had that experience, they would have directed him to allow the mandatory count to progress before rising to his feet.

Azumah also stated that he had been disappointed with the performances of Ghanaian boxers on the world stage in 2019, but he was hopeful that Commey would reclaim a world title after studying the videos of his latest loss and correcting his errors.

Coronavirus: Also Quarantine Akufo-Addo Upon Arrival From Eu...
1 hour ago