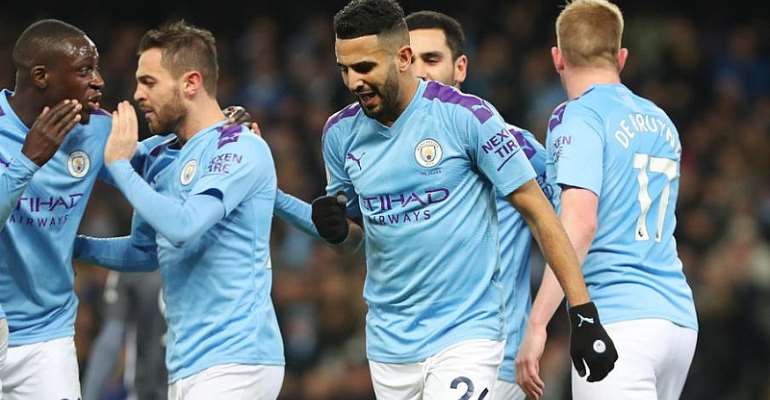 Meanwhile, Pierre-Emerick Aubameyang, who reportedly wants to leave Arsenal, had a lacklustre day as Achraf Hakimi had another assist for Dortmund but could not stop his side suffering a costly late meltdown.

ENGLAND
RIYAD MAHREZ (Manchester City)
'Beware the return of the ex' runs an old football saying and it proved correct when the Algerian scored City's equaliser in an eventual 3-1 win over former club Leicester.

Jamie Vardy put the Foxes ahead in the 22nd minute at the Etihad Stadium but he lead lasted just eight minutes before Mahrez, a persistent thorn in Leicester's side, levelled when his shot deflected off Caglar Soyunu and beat Kasper Schmeichel.

ISMAILA SARR (Watford)
The Senegal winger, who only joined the Hornets in pre-season, had a starring role in a 2-0 win at home to Manchester United that gave the bottom-of-the-table side hope of beating the drop.

He opened the scoring when his tame shot early in the second half somehow found its way through the hands of United goalkeeper David De Gea and then, four minutes later he won a penalty that saw Troy Deeney double the lead after being brought down by Aaron Wan-Bissaka.

PIERRE-EMERICK AUBAMEYANG (Arsenal)
The Gabon striker was far from alone in being well below his best during a dire goalless draw at Everton, although he did have the clearest chance of the match when his goalbound shot was well parried by Toffees goalkeeper Jordan Pickford.

A scuffed effort and a first-time shot over the bar followed before he was replaced by Alexandre Lacazette.

There are reports Aubameyang wants to leave Arsenal and it remains to be seen whether he will, or indeed wants, to impress new manager Mikel Arteta.

GERMANY
ACHRAF HAKIMI (Borussia Dortmund)
The Morocco dynamo conjured his sixth assist of the season when he set up Mario Goetze in Borussia Dortmund's 2-1 defeat at Hoffenheim.

When Thorgan Hazard's pass played Hakimi into the area, the right-winger quickly fed a pass into Goetze who fired home in a superb piece of place from the visitors.

However, they then conceded late goals by Sargis Adamyan and Andrej Kramaric as Hoffenheim took the three points at home to leave Hakimi's Dortmund fourth in the table.

FRANCE
MBAYE NIANG (Rennes)
The Senegal attacker sent his side to third in the table with a late winner at home to Bordeaux. The 25-year-old's fourth goal in as many league games came after 82 minutes as he side-footed home smoothly on a rain-sodden surface in Brittany.

HABIB MAIGA (Metz)
The three-time Ivory Coast international lifted Metz out of the relegation zone with an injury-time equaliser against 16th-placed Dijon. Maiga, 23, has missed just one league game for the strugglers this season who he joined from Saint-Etienne on a permanent deal in July.

HICHAM BOUDAOUI (Nice)
The Algeria African Cup of Nations winner, 20, was one of three goalscorers as Nice hammered bottom-side Toulouse. The midfielder's first goal of the season came on just his second start of the campaign for Patrick Vieira's outfit.

ITALY
SEKO FOFANA (Udinese)
The Ivory Coast international scored Udinese's winner in a 2-1 home victory over Cagliari to help ease his team's relegation fears. The 24-year-old, who spent part of his youth career at Manchester City, opened his account for the season when he was on hand to tuck away a close-range effort after the ball had come back off Fabio Pisacane five minutes from time.

SPAIN
YOUSSEF EN-NESYRI (Leganes)
The Morocco forward grabbed his fourth goal of the season as Leganes won for just the third time in La Liga this season. En-Nesyri, 22, slammed home a cut-back from Kevin Rodrigues on 54 minutes for the second goal in a 2-0 victory over bottom side Espanyol.