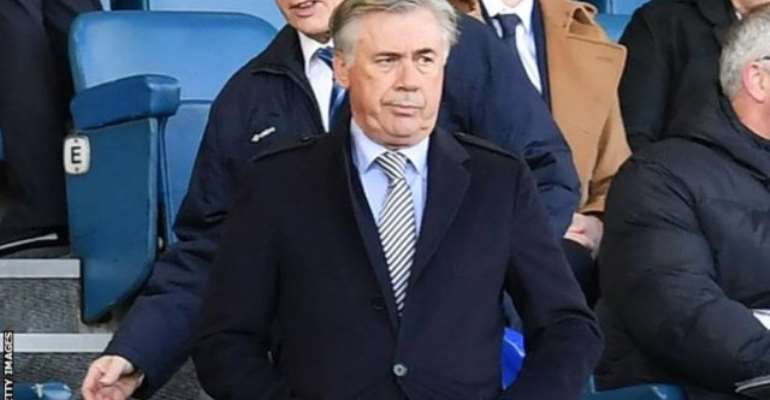 Turning Everton into Champions League contenders will not be "mission impossible", according to new manager Carlo Ancelotti.

The 60-year-old former Chelsea, Real Madrid and AC Milan coach has signed a deal to lead the Toffees until 2024.

He takes over an Everton side that is 15th in the Premier League, four points above the relegation zone.

"The Champions League is the long-term goal and objective," he said. "Nothing is impossible in football."

Everton have not finished in the top four since 2005, which is the only time they had done it since 1988. The only clubs in Ancelotti's managerial career where he has not managed to exceed a 50% win percentage were Italian sides Reggiana and Parma in the late 1990s.

Speaking on the day Everton revealed final designs for a new 52,000-capacity stadium at Bramley Moore Dock, Ancelotti said: "The attraction is the history and tradition of the club.

"It is one of the biggest in England."
Ancelotti has won the Champions League three times as a coach - twice with AC Milan and once with Real Madrid.

He won the won the Premier League and FA Cup Double at Chelsea in 2010 and has also won league titles with Bayern Munich and Paris St-Germain.

Ancelotti was sacked by Napoli earlier this month, despite guiding them into the knockout stages of this season's Champions League.

"It is true I managed top clubs," he said, "At Paris St-Germain the project was really good. I think here is the same. I went to the training ground yesterday. It is fantastic. The fact the club wants to build a stadium means they have a clear idea of how they want success.

"Revenue in football now is very important. Everton want their new stadium so they can improve that and be more competitive.

"For me, it could be good to be here when the new stadium will be open."