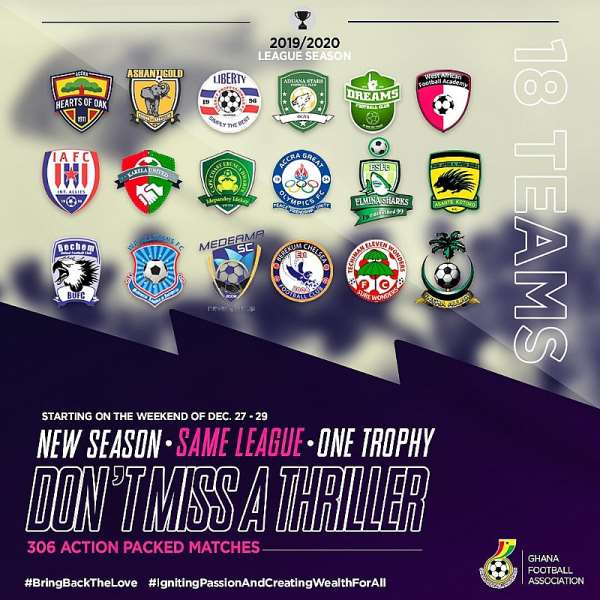 The enthusiasm continues to build-up ahead of the start of the 2019/2020 Ghana Premier League season which is scheduled to kick-off next weekend – December 27-29, 2019.

The top-flight league has been absent for more than a year largely due to the corruption scandal that hit the Ghana Football Association (GFA) in 2018 on the back of the damning Number 12 video released by Anas Aremeyaw Anas.

The rot exposed in that video led to the formation of a Normalization Committee by world football governing body FIFA, and the government of Ghana which condemned the practices exposed in the video.

Fast forward, the work of the Normalization Committee has been completed to give way for a new President of the bettered GFA as well as a new Executive Council.

The body has now paved way for the return of the Ghana Premier League as the football season looks to make a return.

Ahead of the opening weekend, clubs have been having their pre-season and have played a number of friendly games to get their teams in the best shape possible.

Referees who will be playing a big part in the competition have been taken through an integrity workshop by instructors from CAF and FIFA to get them ready for the task ahead.

In addition, several committees have been put together to ensure that every aspect of the sport that will make the league successful is taken care of.

Unlike the previous seasons, the 2019/2020 Ghana Premier League season will feature 18 clubs instead of the usual 16.

In all, 306 matches will be played in the course of the season with the race to win the enviable title expected to be very tough.