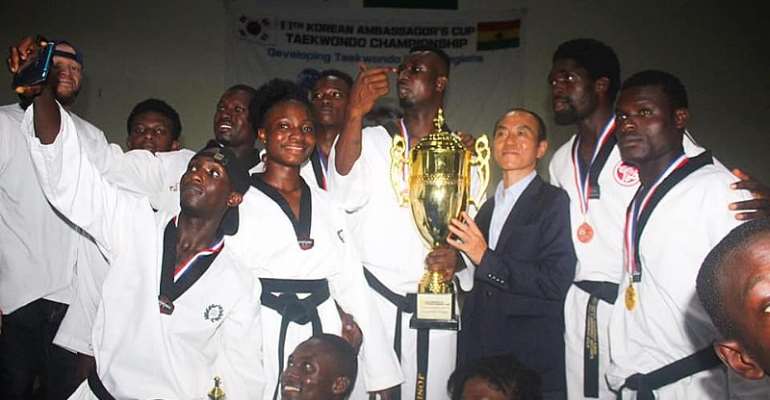 Ghana national Taekwondo coach Maxwell Alonyor has commended the Greater Accra team for excelling at the 11th edition of the Korea Ambassador’s Cup championship held at Tema in Accra.

Speaking to Yours Truly, Coach Maxwell said his team demonstrated a high level of discipline and respect for everyone.

He expressed his joy for their achievement as a reward for perseverance, dedication and hard work.

“Our team was solid because we really prepared, we have been training for a long time, and our team is very disciplined, that is our main weapon to overcome our opponents,” he said.

The Region presented 20 athletes for the championship, and won a total of 14 medals, 6 Gold, 3 Silver and 5 Bronze, gathering 114 points.

President of the Ghana Taekwondo Federation (GTF), Frederick Lartey Out hinted the media about the importance of the event.

“This year has been different because we had all our Member regional Association athletes coming to participate. Our numbers have also increased and it tells you how we’re growing. Our relationship with the Korean Embassy has been cordial because if they have agreed to support the regions, Transport, Feeding and Accommodation to come down and compete, it tells you, we are growing our relationship. We hope to move from Greater Accra to another region to promote the sport there. We have got a brighter future because of the huge numbers in the Cadet category because the children will replace the juniors and seniors when they can no longer compete” he expressed.

A total of 348 athletes from all categories competed in the exciting Championship which was held at the Korea Sports Complex (Tema C3), from Thursday to Saturday, December 5 to 7, 2019.