PL: Man City Come From Behind To Beat Leicester 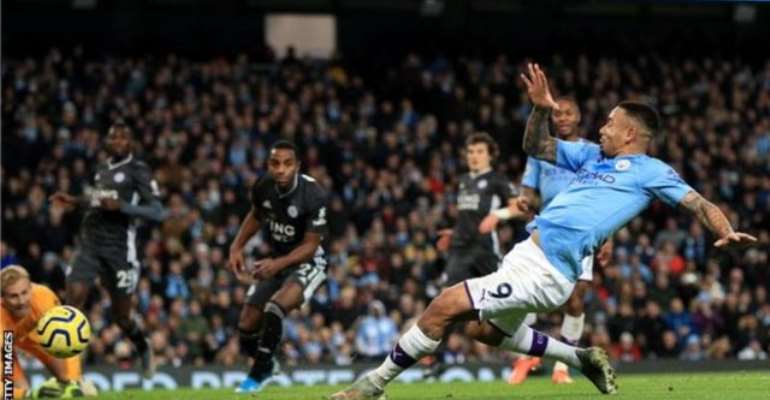 Liverpool remain 10 points clear at the top of the table after an enthralling battle between their two nearest rivals saw Manchester City fight back from a goal down to beat Leicester.

Pep Guardiola's side stay third despite this impressive victory, a point behind the Foxes and 11 behind the leaders - who now have a game in hand - but this was a timely reminder of how good the defending champions are at their best.

Manchester City had to do it the hard way, falling behind to Jamie Vardy's superbly taken breakaway goal, but inspired by a magnificent performance by Kevin de Bruyne, they roared back to take the points.

Vardy silenced the Etihad Stadium when he raced on to Harvey Barnes' pass, out-paced Fernandinho and chipped Ederson to score with Leicester's first effort at goal.

The home side had dominated the early exchanges but, for the fourth home league game in a row, they found themselves behind and, just as in their defeat here by Manchester United, looking vulnerable to fast counter-attacks.

While that game had ended in demoralising defeat for Manchester City, this one would have a very different outcome.

Guardiola continued to urge his players forward, despite the danger posed by Vardy on the break, and they were soon level.

Riyad Mahrez, who was being half-heartedly booed by fans of his former club, cut in from the right and fired in a low shot that cannoned off Caglar Soyuncu and left Kasper Schmeichel helpless.

Leicester dug in, with Schmeichel making a series of saves to ensure the hosts had to wait to turn their vastly superior possession into further goals, but he could not delay the inevitable for long.

Three minutes before the break, Ricardo Pereira lunged in on Raheem Sterling inside the box and, after Mike Dean pointed to the spot, Ilkay Gundogan fired his penalty into the bottom corner.

Things continued in a similar pattern after half-time, with De Bruyne running the show and Leicester clinging on - knowing that while they were only one goal down they had a chance.

Mahrez and De Bruyne, who had hit the post when the score was 0-0, were unable to convert golden chances to finish the Foxes off but, fittingly, it was the Belgian who helped make the points safe with his 13th assist of the season.

He burst into the box with an unstoppable run down the right and squared for Gabriel Jesus to slide home his side's third goal at the far post.

De Bruyne departed, exhausted, to a standing ovation just before the end and was given a huge hug by his manager, both of which were fully deserved.