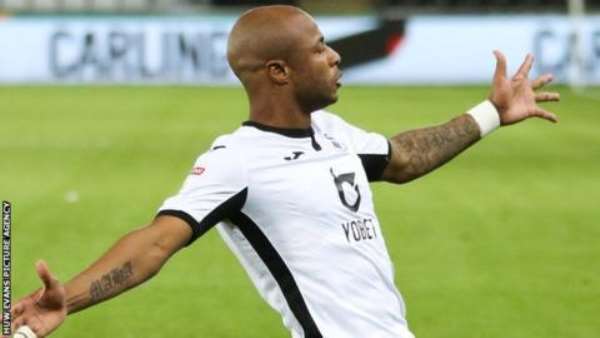 Ghanaian forward Andre Dede Ayew has found the back of the net this afternoon to power Swansea City to an important 1-0 win over Luton Town in the English Championship.

The Black Stars captain has been outstanding for his side since the start of the 2019/2020 season and showed his quality once again in a match week 23 fixture when his side visited Kenilworth Road.

The first half of the encounter ended goalless with the home team proving to be a tough nut to crack for Steve Cooper’s men.

The Swans who were determined to bag all three points did not back down despite their inability to make good use of the numerous chances they created. In the second half, they upped their game and went on to get the vital goal that eventually separated them from Luton.

It was no other person that Swansea City’s vice-captain Andre Dede Ayew who netted the winning goal.

He has now scored in all of his team’s last three matches against Blackburn, Middlesbrough and now Luton.

The Ghanaian has 10 goals in all competitions this season and has also provided four assists after making 24 appearances for Swansea City.