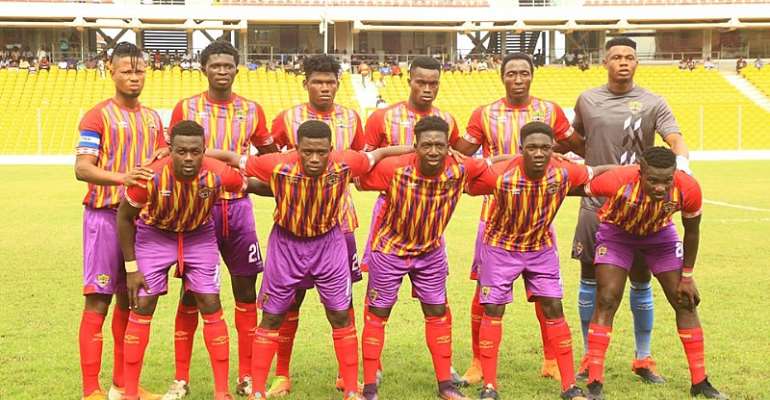 The big game to usher 2019/2020 Ghana Football Season comes off at the Baba Yara Sports Stadium on Sunday, December 22, between Accra Hearts of Oak and rivals Kumasi Asante Kotoko to determine who lifts the trophy which is being played in honour of Ghana's sitting president Nana Akufo-Addo.

The march should have been honoured a long time but had to be postponed due to circumstances beyond the control of the organisers, the Ghana League Clubs Association (GHALCA).

Both clubs have prepared well and the supporters are expecting nothing than good football, to bring back the passion.

The Ghana League Clubs Association has announced gate fees for the 2019 President Cup clash between rivals Accra Hearts of Oak and Asante Kotoko.

The game was originally rained off in October and scheduled for Accra but the poor state of the pitch at the Accra Sports Stadium forced organizers to return to the Baba Yara Sports Stadium.

Asante Kotoko will feature young sensation 16-year-old Mathew Anim Cudjoe ahead of the 2019 President's Cup against sworn rivals Hearts of Oak on Sunday in Kumasi. Anim Cudjoe, nicknamed 'Ghana's Messi' recently joined the Ghanaian giants. He is reported to be closing on a one-year contract with Kotoko after impressing coach Maxwell Konadu.

The hugely talented sweet left-footed playmaker will thrill and he is expected to be involved as Kotoko take on their sworn rivals Hearts. He was discovered during the Baby Jet Under-16 tournament and featured for Ghana's Under-20 team making appearances against Mali and Senegal. He is a dribbler, intelligent on the ball and has a quick-feet.

But the Phobians have pledged to stop any Fabulous player and win on their favourite ground as Hearts of Oak are known to play very well in Kumasi.

The game is expected to attract huge numbers as eyes will also be gazed on coaches Maxwell Konadu and Kim Grant.

Konadu has come back for a second stint with the club amid a torrid weight of expectation on his shoulders.

The big match will certainly herald the 2019/20 Ghana Premier League season which kick starts on the weekend of 27-29 December.