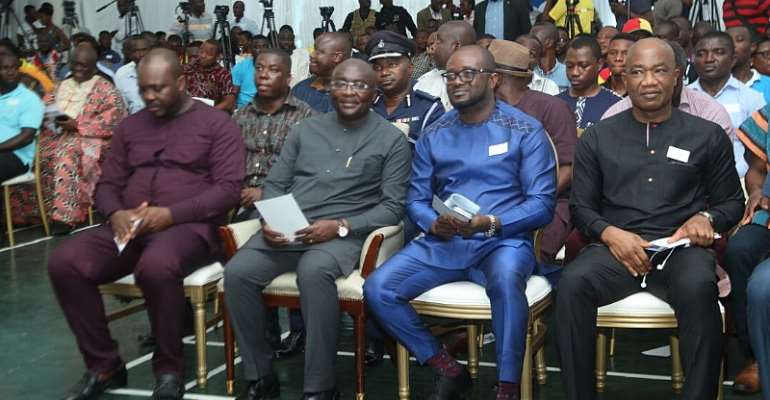 History has been made today at the launch of the 2019/2020 Football Season as Ghana’s Vice-President Dr. Mahamudu Bawumia graced the colourful ceremony.

Gradually the local competitive league football is returning after over a year absence due to the Number 12 video released by Anas Aremeyaw Anas that crippled the Ghana Football Association (GFA).

At the end of a Normalization period, a new set of leaders have been elected to lead the country’s football governing body.

Since assuming office, new GFA president Kurt Okraku and his Executive Council have been making the necessary arrangement with the stakeholders of the sports to see to the return of the league competitions.

At the launch of the upcoming domestic football season at the Sports Hall of the Accra Sports Stadium today, His Excellency Dr. Mahamudu Bawumia joined the football fraternity as a special guest.

It is the first time in the history of the country that such a top-official in government has graced the launching of the football season.

Other top officials that joined the Veep include the Minister for Youth and Sports Hon. Isaac Asiamah, as well as the Director for the National Sports Authority, Prof. Peter Twumasi.

With the official launch of the season out of the way, the Ghana Premier League will commence next weekend. For the Division One and the Women’s Premier League, they have been scheduled to kick off in January 2020.