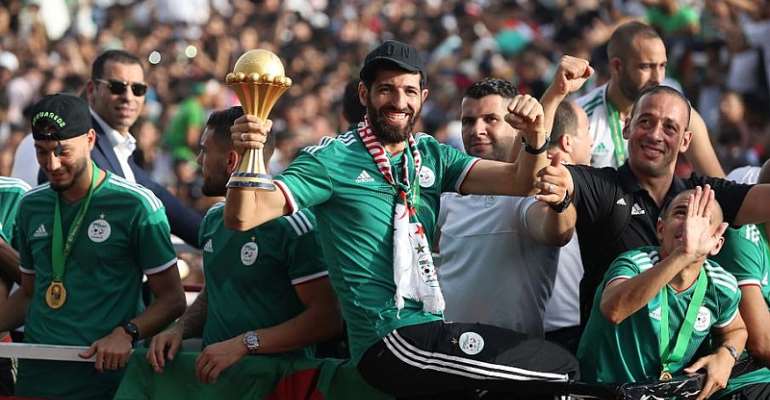 Algeria proved deserved winners of an African Cup of Nations tournament while Esperance won a rare back-to-back double to be again crowned the best club on the continent but only after an ugly boardroom battle.

But the year of African football was overshadowed by a shock-filled 12 months of politics which saw the Confederation of African Football’s president, Ahmad of Madagascar, detained by police, its general secretary fired and the running of the organisation taken over by Fifa.

All combined, the year 2019 will be remembered as one of ridicule for the African game.

The political shenanigans continued through towards the end of the year as CAF unilaterally cancelled a billion-dollar television deal, in a commercial power play that looked to encouraged by world football’s governing body as part of a switch in the alignment of financial revenue.

Ahmad was reported for financial impropriety and alleged sexual harassment to Fifa’s ethics committee by his secretary-general Ahmed Fahmy, who was fired in returned.

But, by the end of the year, Fifa had yet to take any action with Ahmad looking firmly ensconced, even consolidating his position, as he took part in a triumphant tour around the continent with Fifa president Gianni Infantino.

Being able to stay in his post looks to have been the deal agreed he agreed an administrative takeover of CAF headquarters in Cairo, with Fifa general secretary Fatma Samoura being parachuted in from Zurich to run, and re-structure, the organisation for six months.

Allegations of financial management remained unanswered as CAF failed to produce audited reports of its monies at its Congress and the decision to cancel a billion-dollar TV contract with French marketing firm Lagardere Sports, setting off what is expected to be a bitter and costly legal battle.

Ahmad was also widely ridiculed after he coerced his executive committee in ordering a replay of the African Champions League after Morocco’s Wydad Casablanca stormed off the pitch in the second leg in Tunis when the Video Assistant Referee was not working.

But the CAF exco’s decision was overturned when Esperance took the case to the Court of Arbitration for Sport, who declared the Tunisian club the winners.

CHASE ON FOR THIRD CROWN
Esperance are now in search of an unprecedented third trophy, making a solid start to the group phase of the 2019-2020 Champions League before the end of the year.

The African Confederation Cup was won by Egypt’s Zamalek, whose eccentric chairman Mortada Mansour continued to grab the headlines, not only for his regular sacking of coaches but also his maniacal outbursts.

Zamalek edged Renaissance Berkane of Morocco on post-match penalties after a 1-1 aggregate draw in the final.

After the second leg in Alexandria, CAF vice president Faouzi Lekjaa, also head of the Morocco federation and president of Berkane, allegedly headbutted the referee Bamlak Tessema, but later charges were swiftly quashed.

NO AFRICAN JOY ON WORLD STAGE
At the women’s World Cup finals in France, Cameroon and Nigeria both got through the first round but again there was no African representation in the last eight.

At Under-23 level hosts Egypt won the African championship by beating the Ivory Coast in extra time of the final while South Africa took bronze. All three countries go onto the Olympic Games in Tokyo next year.

Senegal, Mali and Nigeria all advanced past the group stage of U-20 World Cup in Poland where only South Africa failed in the first round. Senegal, who beat Nigeria in the last eight, and Mali got as far as the quarterfinals.

Angola, Nigeria and Senegal all got eliminated in the round of 16 at the U-17 World Cup in Brazil while Cameroon lost all their first-round games.