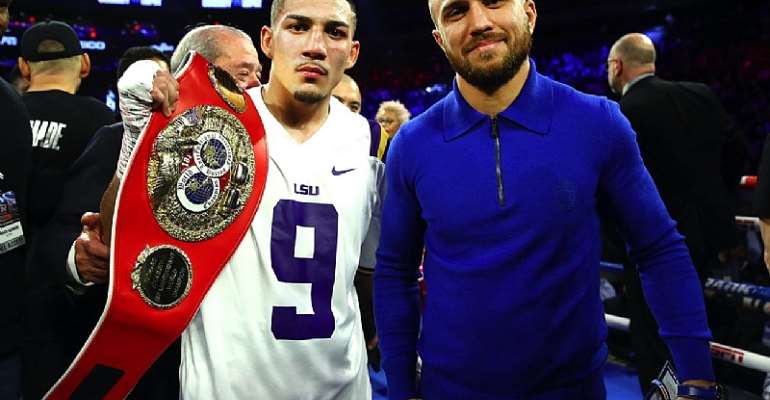 Teofimo Lopez says April 11 or 18th are the two target dates for his unification fight against Vasiliy Lomachenko in 2020. Teofimo says they’re deciding whether to put the fight on pay-per-view and where it’ll be staged.

Lopez (15-0, 12 KOs0) says he doesn’t like Lomachenko as a person, and he wants to knock him out to his WBA/WBO lightweight titles. Teofimo can’t win Lomachenko’s Franchise tag, as that’s something that can’t be lost. With the Lomachenko-Lopez fight possibly being on ESPN PPV, it’s not surprising that he’s already talking trash. The two fighters are going to need to bash each other nonstop if they’re going to attract interest from boxing fans to purchase the fight on pay-per-view.

Lopez wants the fight to take place back at Madison Square Garden where he fought last Saturday night. Teofimo defeated IBF lightweight champion Richard Commey (29-3, 26 KOs) by a 2nd round knockout to pick up his title, which he needed in order to get the Lomachenko fight. Loma made it clear that he wouldn’t fight Teofimo unless he had a title, and now he’s got what he wants.

“People saw last Saturday what I’m capable of doing,” said Teofimo Lopez to Talkbox Boxing Podcast. “How we beat Commey is pretty much everything straight down the middle, and we executed that perfectly. I would love for it to be back home at the Garden in New York.

Teofimo has a lot of time to prepare the Lomachenko fight, and he’s got to make sure he’s ready. This isn’t the time to slack off like Andy Ruiz Jr. did going into his rematch against Anthony Joshua. The good news is Teofimo isn’t a big eater or a partier, so there’s little chance that he’ll eat his way out of the fight.

Placing the fightback at MSG in New York would be perfect, as that ensures that Lomachenko’s boxing fans will get to see it. Taking the fight to Saudi Arabia would be a cruel joke to fans or some other out of the way place like China.

Putting the Lomachenko vs. Lopez fight on ESPN pay-per-view won’t be popular with U.S boxing fans, because Teofimo isn’t a big name yet nationally. Although he’s got a nice little fan base in New York City, he’s not popular outside of the East Coast.

For his part, Lomachenko is mainly popular with hardcore boxing fans in the U.S. He doesn’t fight in the right division for him to be a big name nationally, and he’s not fought anyone that has excited American boxing fans. Here are Lomachenko’s last 10 opponents:

“I’m going to knock the f—- out. I don’t like his a—,” said Teofimo when asked for his prediction on his fight with Lomachenko in April. “In 2020, there’s going to be a lot of big and interesting fights coming up. Don’t miss out.”

This is certainly the right time for Lopez to knockout Lomachenko, but it’s not likely to happen. Lomachenko will be on the lookout for Lopez’s straight right hand down the middle after seeing what he did to Richard Commey.