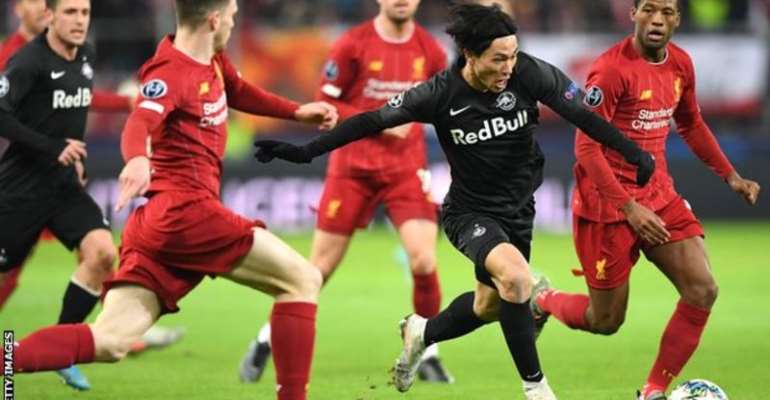 Red Bull Salzburg winger Takumi Minamino will have a Liverpool medical on Wednesday and is set to join the Premier League leaders on 1 January.

The Japan international, 24, is thought to have a release clause of £7.25m.

Minamino has scored nine goals and provided 11 assists in 22 appearances for Salzburg this season.

He played in both of his side's Champions League group games against the Reds this season, netting in the 4-3 defeat at Anfield in October.

Liverpool won 2-0 in Salzburg on 10 December to secure their place in the last 16 of the competition, where they will face Spanish side Atletico Madrid.

Despite playing against the Reds in this season's Champions League, Minamino would be eligible to play for the European champions in the knockout stages of the tournament following a rule change by Uefa last year.

The Japanese, who Liverpool believe is worth more than treble his release clause, would also bolster a squad 10 points clear of second-placed Leicester City at the top of the Premier League, as the Reds look to win their first top-flight title since 1990.

Liverpool were knocked out of the Carabao Cup by Aston Villa on Tuesday. The Reds' youngest-ever starting line-up - fielded because the first-team squad are in Qatar for the Club World Cup - lost 5-0 at Villa Park.

You can watch Liverpool's semi-final against Mexican side Monterrey in Doha live on BBC Two from 17:00 GMT on Wednesday (kick-off 17:30).

Midfielder Fabinho remains sidelined by injury, along with defenders Joel Matip and Dejan Lovren. Midfielder Georginio Wijnaldum, who went off injured during Saturday's win over Watford, has travelled with the squad to Qatar but will not be available to face Monterrey.