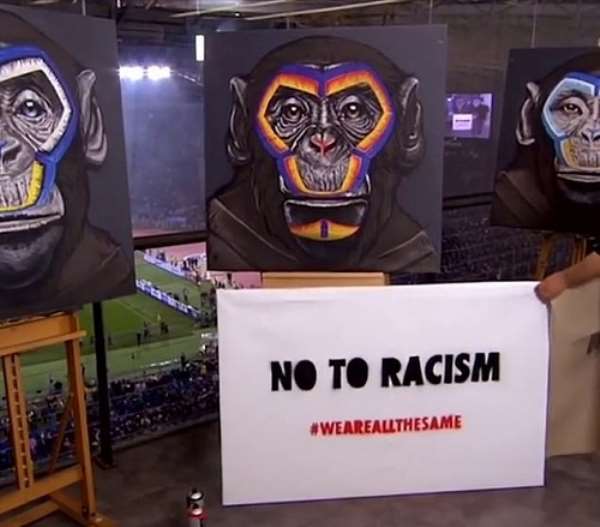 Serie A have made the confounding decision to use images of apes as the centre-piece for an anti-racism initiative.

Italian football has been beset with racist incidents and abuse of black players in a number of games this season.

Monkey chants and noises have been directed towards the victims on multiple occasions but the league have included chimps and apes at the heart of their campaign.

The artist is Simone Fugazzotto and he says he created the pieces to 'change people's perceptions'.

He said: 'For an artist, there is nothing more important than trying to change people's perceptions via their work.

'With this trio of paintings, I tried to show that we are all complex and fascinating creatures, who can be sad or happy, Catholic, Muslim or Buddhist, but at the end of the day, what decides who we are is not the colour of our skin.'

He added: 'I only paint monkeys as a metaphor for human beings. We turn the concept back on the racists, as we are all monkeys originally. So I painted a Western monkey, an Asian monkey and a black monkey.'

Serie A general manager Luigi De Siervo said: 'Simone's paintings fully reflect the values of fair play and tolerance, so will remain in our headquarters.

'The Lega is taking a strong stand against any form of prejudice. We realise racism is an endemic problems and very complex, so we are facing it on three fronts – cultural, via works of art such as Simone's paintings, sporting through a series of initiatives and players and clubs, and also repressive, thanks to the collaboration with the police.

'By acting on these three levels, we are sure that we can win the most important match against this plague that is ruining world's most beautiful sport.'

Brescia striker Mario Balotelli booted a ball off the pitch in response to racist chants from Verona fans earlier this month and there has been an alarming spate of incidents.

Romelu Lukaku is another who was subjected to monkey chants in an away game at Cagliari when he prepared to take a penalty, though the Sardinian club escaped punishment.

The use of apes in Serie A's campaign was met with scathing criticism on social media with many in total disbelief at the decision to include the art.

One person wrote: 'Italian football getting it 1000000x wrong again', while another said: 'This is the most absurd campaign I've ever seen.'

There was uproar just a fortnight ago as Italian paper Corrierre dello Sport ran the headline 'Black Friday' on their front page with images of Chris Smalling and Lukaku to preview the game between Inter Milan and Roma.

In the face of a storm of criticism, the paper defended itself and wrote: 'White, blacks, yellows. To negate every difference is the typical massive error of 'the racism of the anti-racisms'.

'The mental rabble of those casual moralists. 'Black Friday', for those who want and can understand it, it was only a way to celebrate diversity.