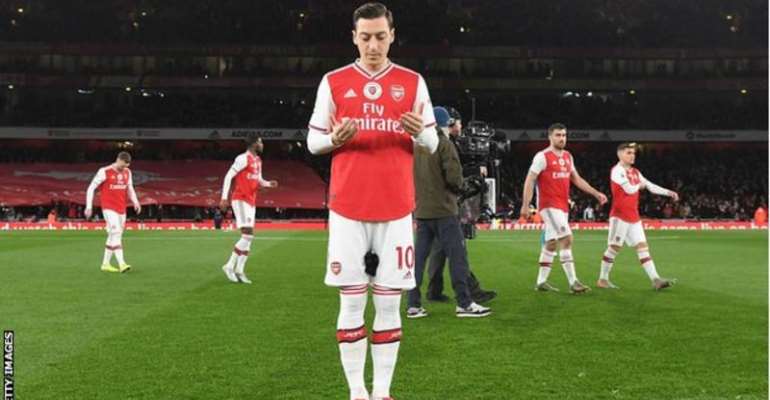 Ozil, who is a Muslim, called Uighurs "warriors who resist persecution" in a post on social media and criticised both China and the silence of Muslims in response.

But Geng Shuang said the German midfielder, 31, has been "influenced by untruthful remarks" and invited him to visit the autonomous Xinjiang region and "have a look" for himself.

Rights groups say about a million people - mostly from the Muslim Uighur community - are thought to have been detained without trial in high-security prison camps.

China has consistently denied mistreating Uighur Muslims in the country and says they are being educated in "vocational training centres" to combat violent religious extremism.

The 2014 World Cup winner's fan club on Chinese search engine Baidu has been removed by its founder, who said in a statement: "In front of national interest, any individual hobby doesn't matter any more."

On social media website Weibo, Ozil's account, which has four million followers, was still there on Monday morning, but there has been no update since 11 December.

Geng said: "I don't know if Mr Ozil has been to Xinjiang himself - but it seems he has been deceived by fake news, and that his judgment was influenced by untruthful remarks.

"If Mr Ozil has the opportunity, we will be pleased to see him go to Xinjiang and have a look."

Earlier, The Global Times described Ozil's comments as "false" and claimed he had "disappointed" football authorities.

The Chinese Football Association said his comments were "unacceptable" and had "hurt the feelings" of Chinese fans.

On Saturday, Arsenal distanced the club from the German's views, saying it was "always apolitical as an organisation".

Ozil played in the Gunners' 3-0 home defeat by Manchester City on Sunday. He reacted angrily to being substituted and he was booed by his own fans as he walked off the pitch at Emirates Stadium.

Bigotry against Muslim students won't be tolerated – Muntaka...
25 minutes ago