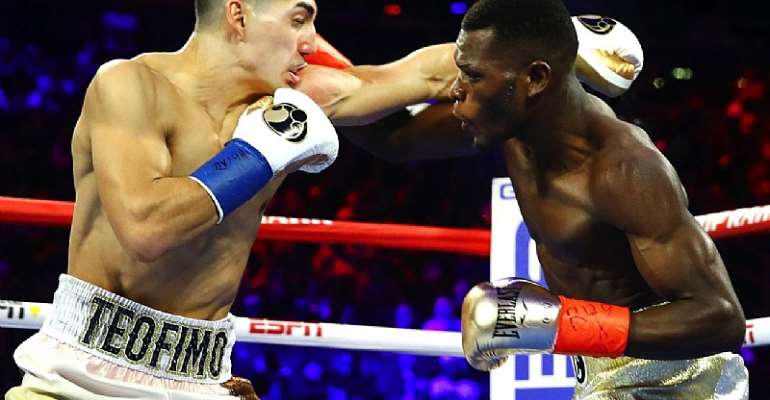 Teofimo Lopez, the new Honduras born American International Boxing Federation (IBF) Lightweight Champion has hailed Richard Commey as a true champion whom he admires for his personality and service for Ghanaians.

“I admire Commey as a true champion, he is amazing and I respect him for putting up for his people” he uttered.

Speaking to USA based Ghanaian journalist, Kwadwo Kwao Thompson aka KKT formerly of Tricky FM in Tarkwa and Medeama Radio fame after the match at the Madison Square Garden, New York where he annexed the title from the Ghanaian, he commended Commey for giving him the opportunity to prove to the world his capability and talent as one of the youngest world champions.

Lopez, 22 hinted that he put in a lot planning and preparation towards the fight and was not surprised to win.

He promised to offer Commey a rematch if he is ready, but for now, he is enjoying his title and looking forward to a fruitful 2020.

Meanwhile, Commey 32 acknowledged that he was caught clean with a fast right-hand punch of Lopez, and thought the referee would give him time to recover, but since the opponent kept on delivering the punches left and right, he had to be saved with the stoppage to avoid any disaster in the ring.

He was sure of coming back strongly to become a two-time world champion, and not giving up till he wins again.

He thanked his trainer, Andrier Rozier as well as Ghanaians for supporting him to he stand and defend the flag of Ghana and the people of Ghana and Africa.

“I congratulate Teofimo, but I will come back stronger and better to become a two – time world champion” he assured.