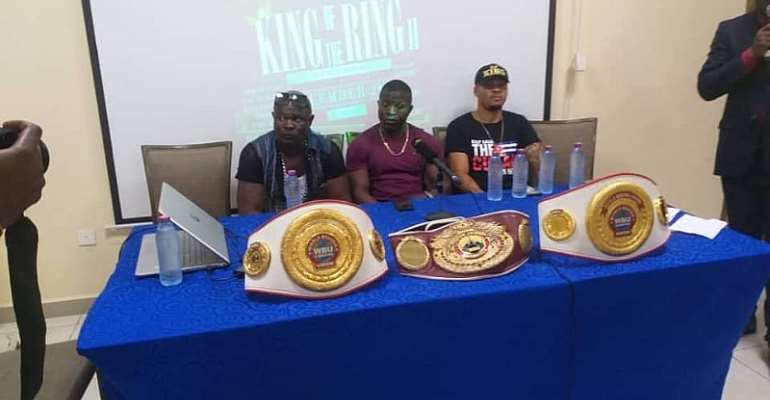 Popular Ghana boxer, Braimah Kamoko aka Bukom Banku will make a return to the Bukom Boxing Arena for the first time after winning an international title from the UK.

Bukom Banku will be headlining a super fight show powered by Monarch Events and Promotions in Accra on 21 December at the Bukom Boxing Arena dubbed ‘King of the Ring II’.

This is also the second time he is making a comeback to the local scene ever since he was beaten by Bastie Samir in the biggest fight ever staged in Ghana in recent times.

Bukom Banku who now holds the WBU Cruiserweight title and would be defending in the USA has stepped up his training and preparing to win back his fans in Accra.

He, however, believes his devout supporters are with him as they showed much love and respect when he landed in Ghana from the United Kingdom with the WBU belt.

Bukom Banku has also promised to put up a better performance since one defeat has taught him many lessons.

The organizers of the Bout Monarch Event and Promotions, at a press conference held at Tomreik Hotel, East Legon called upon all boxing fans to troupe the venue in their numbers to witness series of classic fights.

"The fans are assured that they will witness one of the best moments of boxing at the Bukom Boxing Arena on 21st December 2019," Mohammed Amin Lamptey, who spoke on behalf of Monarch Promotions said.

There will also be Music performances by CDQ, SKII BII, C PRINCE, OB KAY and B TONE.