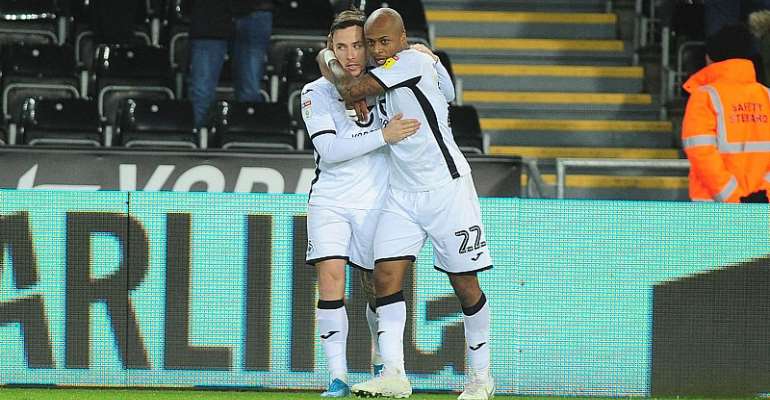 Ghana forward, Andre Ayew has charged Swansea City teammates to build on their morale-boosting win over Middlesbrough as the hectic festive schedule prepares to click into gear.

Steve Cooper's side ended their six-match winless run with Ayew netting a brace and Sam Surridge also on the scoresheet in a 3-1 win.

It was the second home win since the end of August, and the 29-year-old was delighted to put that the wait for a Liberty victory to bed.

However, the Black Stars skipper knows Swansea cannot afford for it to be a one-off with games against Luton, Brentford, Barnsley and Charlton all coming up in quick succession.

“We must continue working hard and playing,” he told the official club website.

“We can’t get carried away; it’s only a victory. It’s a good one but we needed it after a tough week.

“We started really badly but it’s ended well. We need to focus on what’s coming.

“We’ve had a series of bad results, so we now need to get a series of good results to catch up.

“We know it’s important to win in front of our great fans. They love the club with all their hearts and always come in their numbers – whether things are going well or not.

“They have been disappointed with how results have gone lately because we haven’t got good results but, for me, that’s normal when they see the quality of players that we have.

“So to get the victory is good. I hope it’s the beginning of a series.”

Ayew’s brace took his tally to nine goals for the season, and he has now netted three times in the space of three days after his header against Blackburn in midweek.

He also expressed his delight of scoring regularly, but more because it helps the team rather than any personal accolades.

“What’s important for me is to try and get wins. If my goals can bring wins then I must try to get more and more,” he added.

“The most important thing is receiving a good supply from the players. The more that happens, the more goals I will score.

“It’s a good personal thing for me, but it’s more important for me to help the team get the points.”