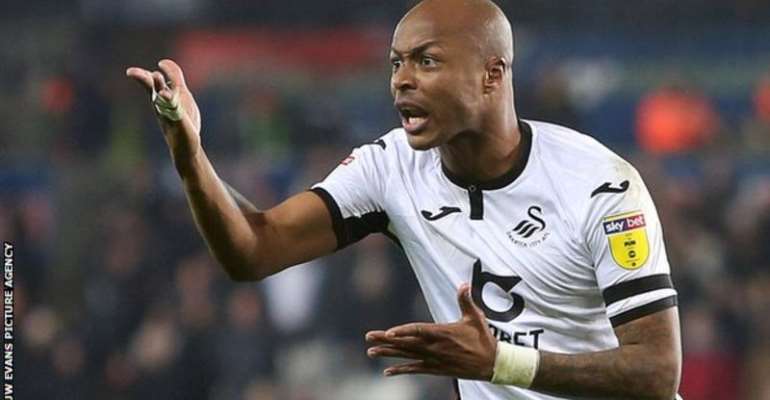 Swansea City head coach Steve Cooper admits it is "very possible" there will be interest in Andre Ayew during the January transfer window.

But the Swans boss is hopeful Ayew will remain at the Liberty Stadium beyond next month.

"He is probably not the only player there will be interest in, whether it's now or for the future," he said.

"This league has lots of players who could play in the league above and Andre will be in that category.

"But there is no news on any interest and I hope that continues. I speak to Andre a lot and I know he is happy with what we are doing."

Ayew spent last season on loan at Fenerbahce following Swansea's relegation from the Premier League in 2018.

Swansea's £18m record signing had been expected to move on last summer - in part due to his sizeable wages - but he ended up staying and has been one of the Championship club's star performers in 2019-20.

Ayew scored his seventh goal of the campaign and was Swansea's best player as they drew 1-1 with Blackburn on Wednesday.

"He has been brilliant in every way, shape and form," Cooper added.

"We know he has the ability - he can be as good as anybody in the league and play at a higher level.

"But the fact he is showing the commitment and work-rate that he is, I think is rubbing off on everybody.

"It certainly is motivating me to see a player like that so committed to what we are doing.

"I am sure the questions are going to come up in January about staying and going but you can see he is player who is really enjoying what we are doing."

'Poor appointment'
Cooper, whose team will target a first win in seven games when they host Middlesbrough on Saturday, was heavily critical of referee Jeremy Simpson's performance in the Blackburn draw.

He has now gone a step further by questioning Simpson's appointment.

"I felt sorry for the ref because he only lives about 20 miles away from Blackburn and came up through the Lancashire FA, so he was put in a really difficult situation I think," Cooper said.

"It's a bit of a poor appointment from the league. I think they should be better than that because it's human nature isn't it, to think about where you live and who you might bump into.

"Maybe that contributed to the decisions he made. I feel sorry for him - they should apologise to him for that. It's like somebody from Llanelli or Neath refereeing Swansea."

The Professional Game Match Officials Limited, the body responsible for match officials, said that the situation is not something it would comment on.