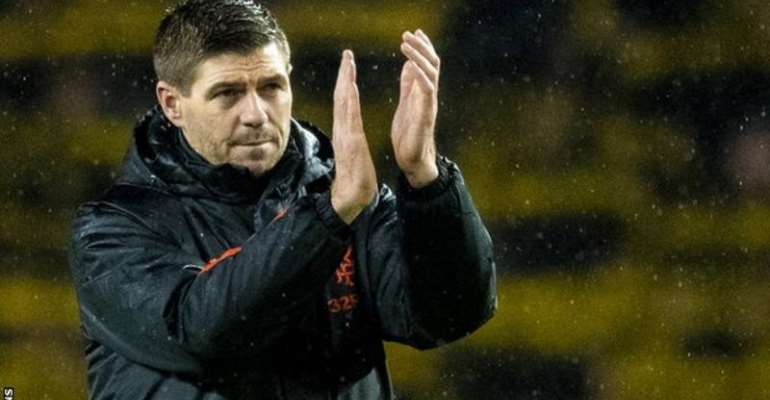 Manager Steven Gerrard believes Rangers are "building something special" after extending his contract until 2024.

The former Liverpool captain, 39, was appointed on a four-year deal in May 2018, leaving his role as Anfield youth coach for his first managerial post.

The Ibrox club sit second in the Scottish Premiership, two points behind Celtic, who beat them in Sunday's League Cup final.

On Thursday, Rangers reached the last 32 in the Europa League.

A 1-1 draw at home to Young Boys was enough to clinch second place in Group G.

In his debut season, Gerrard led Rangers to a runners-up finish in the league and took them from the first qualifying round to the Europa League group stage.

"When [chairman] Dave King approached me about the possibility of extending my contract, it was a very easy decision to make because I'm very happy and feel that we are building something special together at the club," said Gerrard via a club statement.

"I'd like to thank the board for the backing they have given me already in my time at the club and also most importantly, the Rangers fans who have given me and the team such tremendous backing both this season and last."

King added: "From the moment I met Steven, I could tell that he was the right man to help us to drive this club forward on the pitch. He has an elite mentality and that is exactly what I was looking for.

"He is relentless in his desire to bring success to our club and we are delighted that he has signed this new contract, which shows his commitment to Rangers."