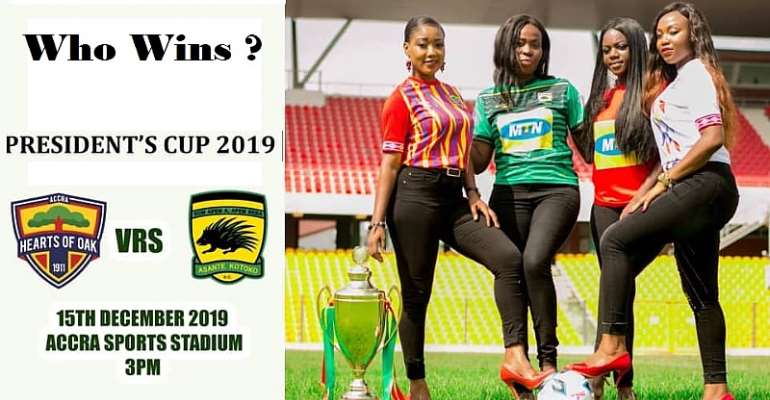 Ghana’s El Classico is on Sunday 15th December 2019 at the Accra Sports Stadium for the President’s Cup.

It is a football battle between the two glamorous clubs in Ghana, Accra Hearts of Oak and Kumasi Asante Kotoko.

All matches between these two sides always come with tales, rumours and mysteries.

This match is no exception with news of Hearts about to sack their hardworking coach, Kim Grant and dismissing their managing director, Fred Moore.

Later the news was that the supporters of Hearts also known as the Phobians have decided to boycott the big game.

However, on the other side, the Fabulous Boys as Kotoko call their team have re-appointed national team B coach Maxwell Konadu as well as Johnson Smith to boost the team.

Both clubs have been preparing feverishly for this gave which is going to tell a lot if really Ghanaian clubs are ready for the football season to take off smoothly after the break.

Since the Ghana Football Association (GFA) elected a new president Kurt E. S. Okraku, every Ghanaian football fan is hoping and praying for a real change, a revolution to move to a higher level to see the game without corruption and bribery.

The referees and coaches have undergone training on integrity and best practices, just like the administrators and managers being groomed to appreciate the club licensing to make the game more professional and attractive.

Sunday is certainly going to be a day for good football, however, the media is also concerned about the pitch at the stadium which recently hosted a musical concert.

As the 2019/ 2020 football season is about to roll, we call for free and fair officiating and that the fans would comport themselves to avoid clashes with the security personnel.

We also pray for good luck to all the clubs and officials.

We pray that the President’s Cup would be well organized and may the best team win.