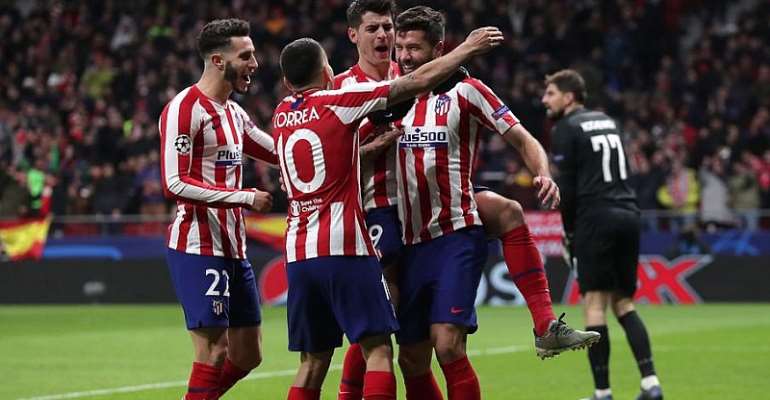 Atletico Madrid lifted the gloom by qualifying for the Champions League last 16 on Wednesday after they beat Lokomotiv Moscow 2-0 to finish runners-up in Group D.

Kieran Trippier missed an early penalty at the Wanda Metropolitano but a second Atletico spot-kick gave the lively Joao Felix another chance and he made no mistake.

Felipe's acrobatic volley shortly after halftime put a poor Lokomotiv side out of sight and ensured Atletico go through ahead of Bayer Leverkusen, who lost away at group winners Juventus.

Finishing second in this season's competition almost guarantees a formidable opponent in the knock-out stages, with Paris Saint-Germain, Bayern Munich, Manchester City, Liverpool and Leipzig all now lying in wait in Monday's draw.

In theory, Leipzig, or a stumbling Bayern, might be the kindest options but Atletico will likely have to find a different rhythm by February if they are to avoid crashing out at the same stage as last year.

It was a morale-boosting victory that spared Diego Simeone's side any further damage after defeat against Barcelona and a draw away at Villarreal all-but ended their La Liga title challenge before Christmas.

Draws have been Atletico's problem in the league but they have also been hard to beat and that resilience may yet serve them well in cup competitions, namely the Champions League and Copa del Rey.

Goals have been a major concern too and Simeone will have been relieved to see two go in after his team managed only one in their previous four matches.

Sitting one point ahead of Leverkusen before kick-off, Atletico knew a victory would be enough and, in the end, they did not even need that as Juve won in Turin.

But nothing was guaranteed and Simeone's side exploded out of the blocks as Morata almost nipped in immediately before Felix beat goalkeeper Anton Kochenkov to the ball and was brought down after 43 seconds.

Felix grabbed the ball and walked towards the spot like he wanted to take the penalty but he was persuaded to stand down in favour of Trippier.

Kochenkov dived right and tipped Trippier's effort onto the post, even if he was lucky not to see a retake for springing off his line too early.

Atletico had a second chance 16 minutes later and this time Felix stepped up without contest. VAR spotted Murilo lifting his arm to control the ball and Felix drove the spot-kick into the corner.

Alvaro Morata thought he had added a second after latching onto Angel Correa's headed through ball but VAR deemed his left ankle to have been offside.

Lokomotiv offered very little but were still in touch while Leverkusen remained level with Juventus at halftime, leaving Atletico needing a second.

They got it in nine minutes after the restart from a simple move and a complex finish. Trippier's short corner was crossed in by Koke and Felipe met it in the air, twisting his body and hooking the ball into the net with his right foot.

With the tension gone, Atletico cruised through the final half an hour. Morata and Thomas Partey both went close to a third while Felix departed to a standing ovation.