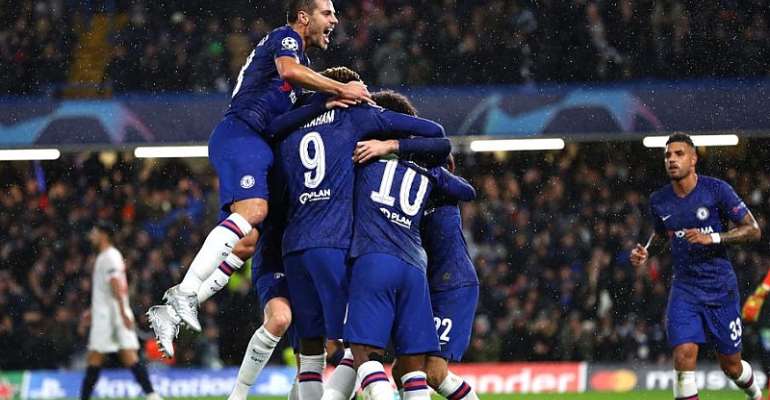 Chelsea booked their place in the last 16 of the Champions League as first-half goals from Tammy Abraham and Cesar Azpilicueta sealed a 2-1 win over a much-changed Lille at Stamford Bridge on Tuesday.

Victory for Valencia over Ajax in the other game in Group H means Frank Lampard's men go through behind the Spaniards with last season's semifinalists relegated to the Europa League.

Chelsea knew victory would take them into the knockout stages no matter what the outcome was in Amsterdam and did their job early on against a Lille side with just one point to show for their return to the Champions League for the first time in seven years.

Simple finishes from Abraham and Azpilicueta were just reward for a dominant first-half display, but Chelsea were forced to hold on in the final stages after Loic Remy halved Lille's deficit against his old club 12 minutes from time.

The visitors were already sure to finish bottom of the group and coach Christophe Galtier showed his priority is trying to secure a return to the Champions League next season by finishing in the top three of Ligue 1 as he made seven changes to the side that beat Brest on Friday.

Chelsea had won just one of their previous five games after a great start to life under Lampard and the Blues boss responded by adding a little more experience to what has been a very young side so far this season.

Antonio Rudiger returned from injury to make just his second start of the campaign at centre-back, while Jorginho was restored in midfield to the side that lost 3-1 to Everton on Saturday.

Up front, Abraham was again flanked by Christian Pulisic and Willian, and all three combined to open the scoring on 19 minutes.

Pulisic unselfishly played in Willian on the right instead of opting to go for goal himself and the Brazilian's driven cross was tapped in by Abraham for his 13th goal of the season.

Lille have been the whipping boys in a three-way shootout for two places in the last 16 and showed why 10 minutes before halftime when Azpilicueta was left completely unmarked to head home Emerson's corner from close range.

Mike Maignan in the Lille goal kept his side in the game with a fine double save from Pulisic and Willian at the start of the second half.

However, Chelsea took their foot off the gas as Lampard replaced Pulisic and Abraham ahead of a busy festive period in the Premier League.

And the hosts had to suffer a nervy final dozen minutes when Remy fired in off the underside of the bar.

Remy was a peripheral figure during three seasons at Chelsea between 2014 and 2017 but nearly came back to haunt his old employers only to fire weakly into the arms of Kepa Arrizabalaga in stoppage time.

Instead, Chelsea saw the game out to mark another impressive milestone in Lampard's first season in charge

Wesley Girls' brouhaha: We’ll cooperate with authorities to ...
9 minutes ago