UCL: Zenit Eliminated After Defeat Away To Benfica 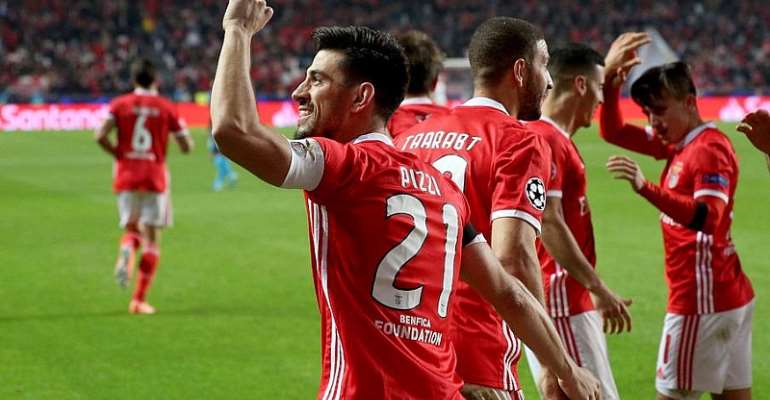 Zenit St Petersburg missed out on a place in the Champions League last-16 when they lost 3-0 away to Benfica in their final Group G match on Tuesday and finished bottom of the table.

Despite being outplayed, 10-man Zenit were minutes away from finishing in second place until Olympique Lyonnais scored an 82nd-minute goal to snatch a 2-2 draw at home to already-qualified RB Leipzig to go through instead.

Olympique finished with eight points while Benfica and Zenit ended level on seven with the Portuguese side taking third place and a spot in the Europa League knockout stages thanks to their superior head-to-head record against the Russians.

Neither side made much headway in the first half but Benfica went ahead two minutes after the break when a neat passing exchange created space for Pizzi on the left and the Benfica captain sent in a low cross which Franco Cervi turned in.

Nine minutes later, Zenit's Douglas Santos was given a second yellow card for handling in the penalty area Pizzi converted the penalty for Benfica.

Zenit finally mustered their first shot on target in the 77th minute when Sardar Azmoun hooked the ball towards goal but his bouncing effort was tipped over by Odisseas Vlachodimos.

Two minutes later, a Benfica corner was floated over from the left and Azmoun, under no real pressure at the near post, turned the ball into the roof of the net from a narrow-angle.

At that point, Zenit were still second in the group, ahead of Olympique and Benfica on their head-to-head record, but the French side's late goal completed a miserable evening for them.