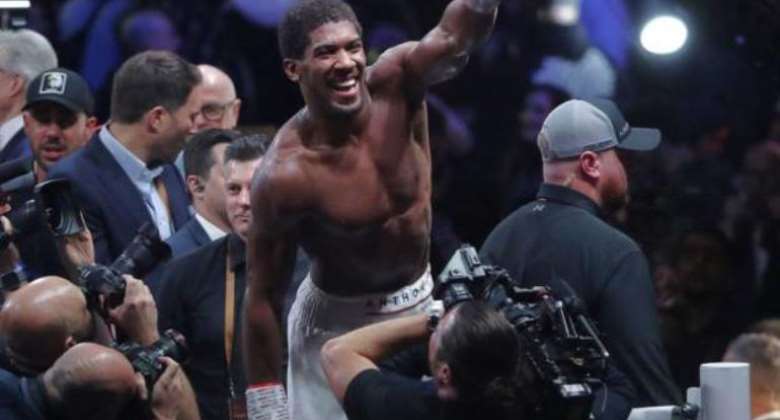 Anthony Joshua (23-1, 21 KOs) says he’s ready to “Rock and Roll” against his WBO mandatory challenger Oleksandr Usyk (17-0, 13 KOs) after hearing the news that WBO president Paco Valcarcel says needs to defend that title within 180 days against the mandatory.

Joshua won back the WBO strap along with the IBF and WBA heavyweight titles in beating an out of shape 283 pound Andy Ruiz Jr. (33-2, 22 KOs) last Saturday night at the Diriyah Arena, in Diriyah, Saudi Arabia.

Joshua tool full advantage of Ruiz’s lack of conditioning and his poor mobility by boxing circles around him for 12 rounds.

Joshua’s promoter Eddie Hearn still needs to talk with the IBF and WBO to determine which of the two mandatory defenses needs to come first. The WBO president Valcarcel is saying Joshua has to defend against their mandatory within 180 lbs, but that still may not happen depending on what the IBF says.

Ideally, the IBF and WBO will agree which of the two mandatory’s Joshua can fight first. If they don’t, then Joshua will have to give up one of the belts. It’s pretty obvious that Joshua will keep the WBO in order to face Usyk in the far bigger fight than a defense against the IBF mandatory 39-year-old Kubrat Pulev. Joshua vs. Usyk would be the battle of the Olympic gold medalists, and it would be a much bigger fight than Joshua-Pulev.

“We’ll have to speak with the governing bodies to see which one of those come first,” said Joshua’s promoter Eddie Hearn about the IBF and WBO mandatory’s that are due.

Clash of the Dunes is over..now clash of mandatories will be next.. WBO mandatory challenger ?

Former undisputed cruiserweight champion Usyk has the kind of talent that would give Joshua a lot of problems. For one, Usyk wouldn’t come into the fight with Joshua obese, and untrained like we saw from Ruiz last Saturday. Usyk isn’t going to take it easy and live it up during training camp as he prepares for Joshua.

Usyk has the ring IQ to beat Joshua, and doesn’t matter if AJ fights with his Klitschko style against him. Usyk already has a pretty good idea how to beat robotic Klitschko style that Joshua showed against Ruiz last Saturday.

What Usyk doesn’t have going for him size and punching power. He’d be giving away close to 20 lbs against Joshua, but that’s about it. Joshua is no longer weighing in the mid-240s like he had been, and that’ll help Usyk. AJ isn’t as powerful in the 230s as he was when he was fighting the 240s and 250s.