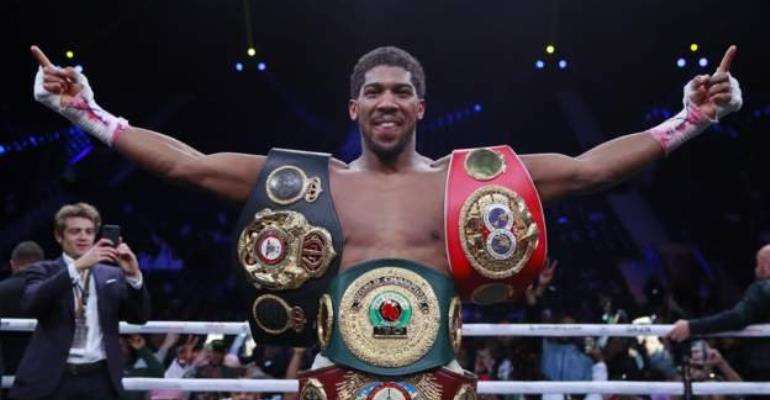 Anthony Joshua accomplished so much yesterday in The Kingdom of Saudi Arabia. First and foremost, the 30-year-old British superstar got the revenge over Andy Ruiz he so badly craved. Putting right the terrible wrong he suffered back in June, Joshua boxed brilliantly and smartly in the rematch, aided at least partially by the pretty poor physical shape Ruiz entered the ring in. But this is not to take anything away from Joshua. He did it when plenty of critics said he would not be able to do it.

Now a two-time world heavyweight champion – quite astonishingly, and often forgotten, is the fact that Joshua has had such a relatively small number of pro fights; just 24 – Joshua goes into the history books. No fighter has ever managed to become a two-time heavyweight king with so few pro bouts fought. Floyd Patterson, the first man in history to regain the heavyweight crown, did it after 37 fights, while the closest to Joshua in terms of numbers is Tim Witherspoon, who became a two-time champ (alphabet-wise) after having had 25 pro bouts.

It really is amazing, as promoter Eddie Hearn often says, how much Joshua has accomplished after having had such little pro experience. But yesterday’s triumph must be at the top of the list for AJ as far as how much the win means to him. Back on top, arguably the best big man on the planet (although supporters of Deontay Wilder and Tyson Fury will no doubt disagree) and set to engage in further massive fights/events, Joshua, 23-1(21) might feel most satisfied over the way he is able to give the middle finger to his critics (as he said he would do after he got the win).

Now having boxed nine world title fights (again, amazing considering Joshua turned pro just six years ago) Joshua can look ahead to those fights with Fury and Wilder – we hope to see them anyway.

But for now, Anthony Joshua is the king of the world. Who out there doesn’t feel good for him?

By James Slater
In a beautiful display of power punching, WBO super bantamweight champion Emanuel Navarrete (30-1, 25 KOs) stopped Francisco Horta (20-4-1, 10 KOs) in round 4 on Saturday night in fight shown on ESPN+ in a Top Rank Boxing promoted card at the Auditorio GNP Seguros in Puebla, Mexico.

Navarrete pinned Horta to the ropes in round 4 and unloaded on him with a flurry of huge shots that snapped his head repeatedly. Finally, the referee stepped in and halted the contest when he recognized that the 26-year-old Horta was hurt and close to being dropped. The fight was halted at 2:09 of round 4.

Navarrete power shots too much for Francisco
Horta had been fighting with his back against the ropes off and on since the 2nd round and was doing a fairly decent job of eluding some of the punishing shots from the 24-year-old Navarrete. However, in the 4th round, Horta’s luck ran out when Navarrete put together a flurry of speedy shots that came straight down the middle.

After a slow start in round one, the 5’7″ Navarrete recently stalked Horta around the ring, throwing leaping shots from odd angles, and looking unorthodox to the extreme. The shots weren’t thrown with much hand speed by Navarrete, but they packed a wallop. The combination of the odd angles, power and the high volume was ultimately too much for #13 WBO.

When the fight first started, Navarrete didn’t look that special with the slow jabs that he was throwing, and wide hooks. Horta was able to get out of the way of a lot of the shots.

Navarrete kept changing stances from orthodox to southpaw and landing hard shots from the outside mostly. But when he would get in close, he was landing big uppercuts to the head of Horta.

The ‘W’ for Navarrete was the fourth defense of his WBO 122 lb title in 2019. He won the belt a year ago this month in beating Isaac Dogboe by a 12 round decision. Dogboe was seen as the favourite going into that match, but Navarrete’s relentless attacking style of fighting wore him down in the second half of the fight.

Navarrete has big plans in 2020 in targeting the other champions at 122 for unification matches. He also is interested in battling bantamweight champion Naoya Inoue if he comes up to 122. With the way Navarrete looked tonight, he might have a difficult time trying to beat Inoue.

The difference in hand speed, technical boxing skills and accuracy between the two is huge. If Navarrete could handle Inoue’s power, he’d make it very tough on the Japanese star with his power, size and reach. It would be an interesting fight if took place, but you’d have to favour Inoue in winning big.