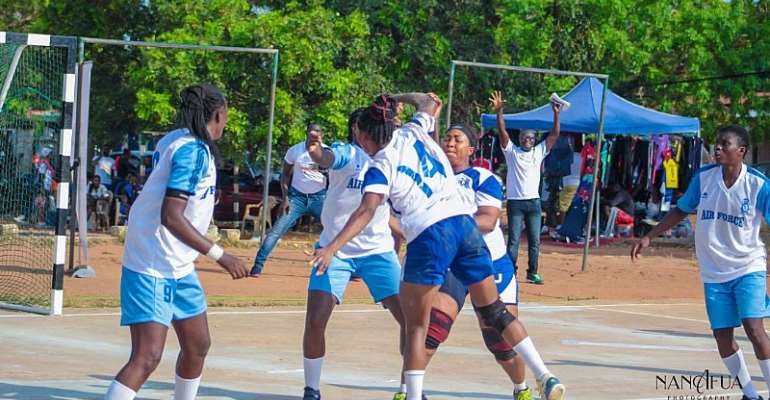 The climax, which also saw players who have excelled during the year being awarded, had Ghana Police Women facing Ghana Airforce in a repeat or revenge affair after the latter lost the finals of the Ghana Gas knockout.

League champions Police, having won the International Handball GALA to precede the League, triumphed over the Burma Camp favourites, in a cagey encounter which the law enforcers' experience played a major factor.

It was a thrilling true champion of champions duel as Police won 17-16.

Regina Daime of Air Force was the goal queen with 7goals and was Adorned the Most Valuable player & left-back back player of the season.

The final of the Men was classy, steady, tough, applaudable, superb tricky, and cheered from start to finish as Police and Prisons entertained the all.

Police, league winners, took the lead, getting a goal from the first attack, while the knockout champions, Prisons gradually came into the game and eventually was ahead 17-11 at half time.

Prisons then took full charge and at 40 minutes played were still leading 25-18 as their Goalkeeper Constance Akudi stole the show by denying Police on several occasions.

The final embers of the game saw Police, with 2 men down push to equalize to close the gap but Prisons stood their grounds and the game ended 30-27 for Prisons.

The Burma Camp Handball court saw over 400 spectators, which included dignitaries, who came cheer their teams to victory.

Prisons, then forcefully arrested Police and lifted their second trophy of the season.

It was in no doubt as Prisons' Emmanuel Asare and Coach Anthony Odametey were awarded the Most Valuable Player and the Best Coach of the year.

The Most Valuable Players of the year walked home with Souvenirs from one of the leading home appliances, Binatone.