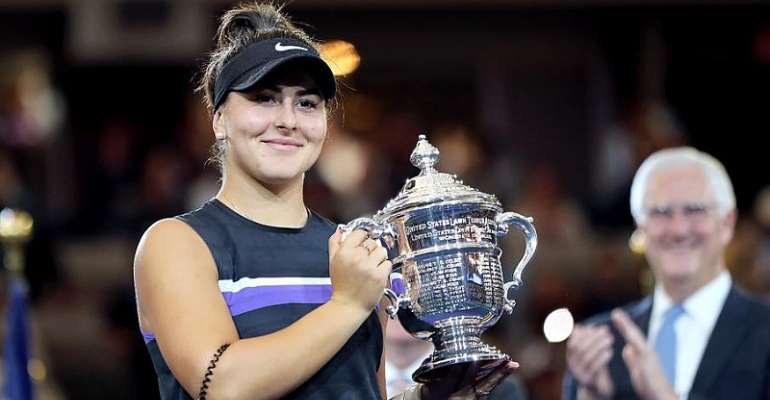 Bianca Andreescu was awarded the Lou Marsh Trophy as Canada's athlete of the year on Monday, capping a remarkable year in which the teenager became the country's first tennis Grand Slam singles champion with her US Open triumph.

Andreescu, an unknown quantity to most in Canada a year ago, was a unanimous pick after a breakout season in which she upset Serena Williams in the US Open final and reached a career-high fourth in the world rankings.

"Wow, I'm so thankful for this award. I was not expecting it and to be the first tennis player to win is even more surreal," the 19-year-old Andreescu said in a statement issued by Tennis Canada.

"None of my success this year would have been possible without the support from all of Canada."

Andreescu, who at the end of 2018 was ranked 178th but who finished this season at No 5, began to gain attention in January when she beat former world No 1s Caroline Wozniacki and Venus Williams on her way to the Auckland final.

In March, as a wildcard, she won the Indian Wells title but a shoulder injury forced her to retire from a last-16 match at the following event in Miami and caused her to miss most of the clay and grasscourt seasons.

Andreescu, the daughter of Romanian immigrants to Canada, then won her hometown tournament in Toronto before going on to make history in New York where she denied Williams from earning a record-tying 24th Grand Slam singles title.

The Canadian lost just four completed matches during the season, which she finished with a 48-7 record including injury retirements.

The other finalists for the award, which is named after a former Toronto Star sports editor, were sprinter Andre De Grasse, golfer Brooke Henderson, NHL goalie Jordan Binnington and MLB pitcher Mike Soroka.

"Canadian sports crushed it this year so there are definitely many other athletes who deserve a piece of this award as well – we all motivate each other to be better," said Andreescu.

"I can't wait for what 2020 will bring and am always proud to represent Canada at the highest level."