Arsenal Strike Back To End Winless Run At West Ham 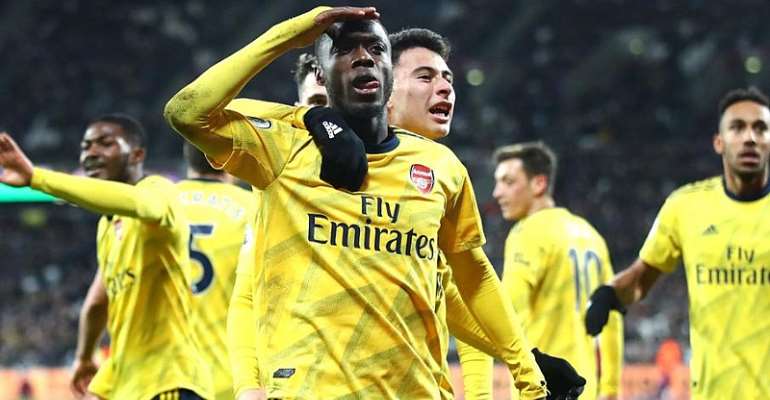 Arsenal ended their worst run without a win in 42 years by coming from behind to beat West Ham 3-1 on Monday thanks to a three-goal blitz in nine minutes after the hour mark.

Another miserable night for caretaker Gunners boss Freddie Ljungberg seemed in store when the visitors trailed at halftime to Angelo Ogbonna's deflected header.

However, Arsenal suddenly sparked into life after Gabriel Martinelli scored his first Premier League goal as Nicolas Pepe finally started to deliver on his club record £72 million fee by curling home a brilliant second before crossing for Pierre-Emerick Aubameyang to secure all three points.

A first win in 10 games in all competitions lifts Arsenal up to ninth and cuts the gap on fourth-placed Chelsea to seven points in the battle for Champions League qualification next season.

Ljungberg reacted to taking just one point from his opening two games in temporary charge against lowly Norwich and Brighton by making five changes from Thursday's 2-1 home defeat by the Seagulls.

Alexandre Lacazette was among those dropped as Pepe made his first Premier League start in six games.

The Ivorian's inability to make an impact has summed up Arsenal's season as high expectations of a return to the Champions League next season have fallen flat in recent months with a string of poor performances and results that ultimately cost Unai Emery his job.

Not much had improved in Ljungberg's first two games since replacing the Spaniard and it was the same tame and lifeless Arsenal for the first hour against a West Ham side that have won just once in their last 11 games.

In a first half of precious little good football, it was fitting the opener arrived in scrappy fashion as Ogbonna's attempted header came off his shoulder and deflected off Martinelli to wrong-foot Bernd Leno in the Arsenal goal.

Leno then made an important save at the start of the second half from Declan Rice's well-struck shot to keep Arsenal in the game.

Out of nothing, Ljungberg's men levelled when Kolasinac burst down the left and crossed low for Martinelli to slot home his eighth goal of the season after impressing in the League Cup and Europa League.

Suddenly the confidence which Emery and Ljungberg bemoaned had drained away from their players in recent times was restored, none more so than in Pepe, who cut inside onto his favoured left foot and curled into the top corner.

That was his first Premier League goal from open play, with his only previous strike coming from the penalty spot against Aston Villa in September.

Aubameyang has been the one player Arsenal have been able to consistently rely on throughout the course of a disappointing season to date and the newly installed captain put the seal on a first league win in over two months by sliding in to meet Pepe's cross for his 13th goal of the campaign.