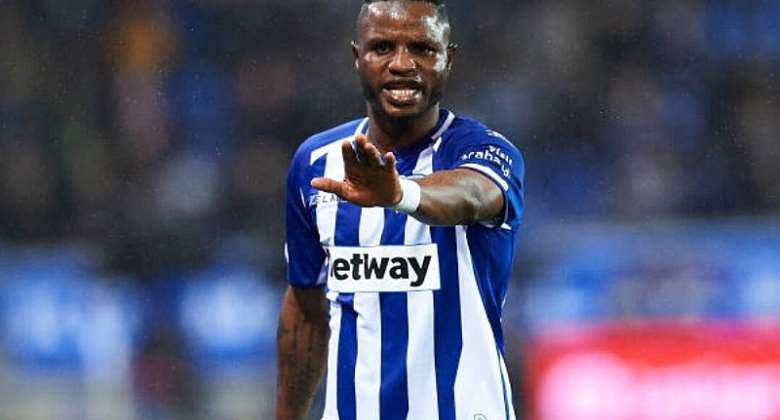 Liverpool's confident march towards a first English title since 1990 continued with Mo Salah and Naby Keita both on target in the 3-0 win at Bournemouth.

Algerian defender Ramy Bensebaini, meanwhile, took the plaudits during Borussia Moenchengladbach's win over Bayern Munich which kept them top of the Bundesliga.

And there were other eye-catching contributions from some of the many Africans playing in Europe's top leagues over the weekend.

ENGLAND
MOHAMED SALAH (Liverpool)
The Egypt forward was in typically deadly form as Liverpool consolidated their eight-point lead at the top of the Premier League with a 3-0 win at Bournemouth on Saturday. With Jurgen Klopp's side already leading by two goals, Salah – who had provided an assist for Naby Keita earlier in the match – wrapped up the points in the 54th minute when he ran onto Keita's pass and slotted home. It was Salah's 63rd goal in his 100th Premier League appearance and only Alan Shearer (79), Ruud van Nistelrooy (68) and Sergio Aguero (64) scored more in their first 100 games in the competition. Salah has now scored more Premier League goals against Bournemouth (seven) than any other opponent.

NABY KEITA (Liverpool)
The Guinea midfielder also impressed to help title-chasing Liverpool cruise to victory over Bournemouth. After Alex Oxlade-Chamberlain put Liverpool ahead, it was Keita who made it 2-0 in the 44th minute as he slotted home after Salah set him up with a clever backheel. Keita turned provider for Salah after halftime as Liverpool extended their club record unbeaten run to 33 league games. They have won 15 of 16 Premier League matches this season.

KELECHI IHEANACHO (Leicester)
The Nigeria forward maintained his recent resurgence with an influential display in Leicester's record-breaking 4-1 win against Aston Villa on Sunday. Iheanacho scored a last-minute winner against Everton last weekend in his first league appearance of the season and he was back in goal-scoring form at Villa Park. Having already set up Jamie Vardy's opening goal, Iheanacho made a well-timed run to meet James Maddison's cross and finish from close range. That doubled Leicester's lead and made it four goals in four appearances in all competitions for Iheanacho this term.

GERMANY
RAMY BENSEBAINI (Borussia Moenchengladbach)
The Algerian defender, who joined Gladbach from Rennes in August, scored both goals in a 2-1 win over Bayern Munich which ensured Borussia remained top of the table. After converting a corner with a perfectly placed header in the 60th minute to make the score 1-1, Bensebaini converted a penalty deep into second-half injury time to give Gladbach the three points. Bensebaini was cool and calm from the spot – perhaps because he had forgotten that during the week he was nominated as the side’s principal penalty taker and needed to be reminded by a teammate.

ACHRAF HAKIMI (Borussia Dortmund)
Hakimi was at his very best in Dortmund's 5-0 destruction of Fortuna Duesseldorf, providing an assist for one of Jadon Sancho's two goals and proving a constant danger on the edge of the box. Hakimi's pace and vision are among the best in the Bundesliga and Dortmund will sorely miss him should he return to Real Madrid at season's end as expected.

STRELI MAMBA (Paderborn)
Mamba's superb assist set up Sven Michel's 90th-minute winner away at Werder Bremen, with the German-born, Congo-eligible forward showing deft footwork to put the goal on a platter. It's been an incredible few weeks for the Paderborn forward, who has struck a rich vein of form in helping his side accrue valuable points in the battle to avoid relegation.

FRANCE
VICTOR OSIMHEN (Lille)
Victor Osimhen's reputation as a goalscorer continues to rise after the 20-year-old Nigerian scored the only goal in Lille's 1-0 victory over Brest on Friday. It was Osimhen's ninth of the season, all of them coming at home. After having one acrobatic effort well saved in the 12th minute by Brest keeper Gautier Larsonneur, Osimhen broke the deadlock four minutes later, latching on to Jonathan Ikone's pass. It was a third successive win for Lille who are now up to third in Ligue 1 and in good form heading into their Champions League tie against Chelsea on Tuesday.

These two had to settle for stalemate as Udinese and Napoli drew 1-1 but each played their part. Ivorian Fofana sent the ball through for Kevin Lasagna to score the opening goal after 32 minutes, taking advantage of Senegalese defender Koulibaly being out of position. A sliding Koulibaly tackle had earlier stopped Lasagna in his tracks in front of goal with Fofana missing a chance to score when he fired over the bar. Udinese extended Napoli's winless run in the league to seven games.

SPAIN
MUBARAK WAKASO (Alaves)
Ghanaian midfielder Mubarak Wakaso picked up the wrong kind of headlines when he was sent off during Alaves' 3-0 defeat at Granada on Saturday. Wakaso received a second yellow card in the 67th minute for a late challenge on Carlos Neva when Granada were already two up. Alaves defender Victor Laguardia was also sent off late on. Alaves drop to 15th in the table while Granada move up to ninth.

Court withdraws arrest warrant for Xavier-Sosu after reporti...
29 minutes ago