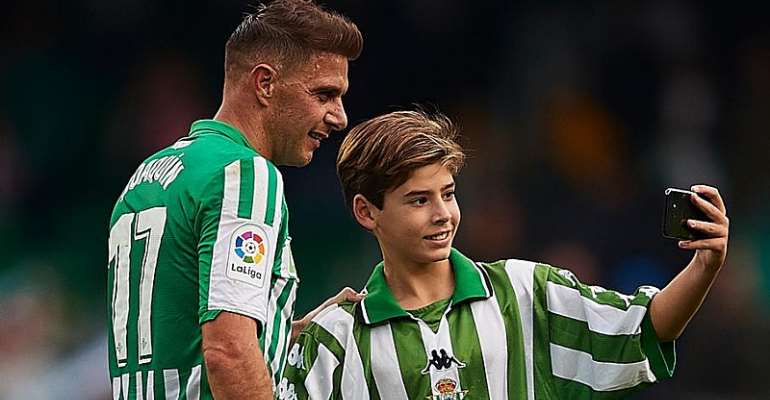 The following are the main talking points from the weekend's action in La Liga.

It is rare for the front page of one of Spain's national newspapers not to splash on Real Madrid or Barcelona, but Marca led with 'Joatrick' on Monday.

Veteran Real Betis midfielder Joaquin Sanchez, 38 years and 140 days old, scored an 18-minute hat-trick as his side beat Athletic Bilbao 3-2 on Sunday, becoming the oldest player to ever net a treble in La Liga.

No player in Europe's top five leagues have scored a treble at an older age, with the next close Claudio Pizarro in the Bundesliga at 37 years 151 days.

"I've never been a great goalscorer and to score three against an opponent like this is something to be proud of," said Joaquin. "Above all at my age, don't think that it's easy."

Suarez's magical backheel
Lionel Messi took the plaudits as he scored a hat-trick against Real Mallorca on Saturday as Barcelona ran out 5-2 winners, but the best goal was scored by Luis Suarez.

The Uruguayan forward's magnificent backheel effort which flew past Manolo Reina for the Catalan league leader's fourth goal will go down as one of the strikes of the season.

Frenkie de Jong played two one-twos in midfield and then threaded the ball through to Suarez, who powerfully backheeled the ball into the ground and up past Reina.

"It's the best goal of my career," said Suarez. "I knew that it was a tight angle and it was a last resort to hit it with my heel. I was looking to hit it hard so it bounced as it was hard to beat the keeper."

Benzema bounces back
Karim Benzema has been Real Madrid's best player over the last year but he struggled on Saturday in the team's 2-0 win over Espanyol.

The French forward missed two clear-cut chances as Zinedine Zidane's side laboured to kill off the match, after Raphael Varane's opener.

However, Benzema eventually got his goal, firing in his 11th of the season from close range, with only Barcelona talisman Messi boasting more - 12, after his hat-trick against Real Mallorca.