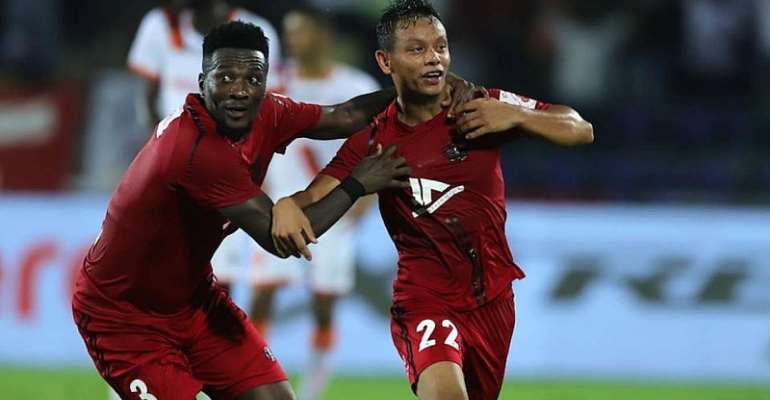 A mentor who is also one of the boys, that is how Asamoah Gyan sees himself when he is with a football team. It could be the Ghana national side for whom he has a record 51 goals in 109 games and or it could be NorthEast United FC (NEUFC) where he has three goals and one assist in six games of the Indian Super League. “I have played in a lot of competitions and I see things in a game that a lot of young players don’t. I am not perfect but I have come here to help and I think my work here is beginning to show. We have started very good; personally I have started very good. But I have to be more consistent,” he says, in an interview over the phone from Guwahati.

Gyan, who turned 34 last month, has played the final rounds of eight Africa Cup of Nations and isn’t ruling out a ninth, in 2021.

“When the time comes and I am available, why not? I am available for Ghana right now,” he says. Nicknamed Baby Jet, Gyan also played in the 2004 Olympics and three World Cups from 2006. No one from Africa has as many goals in the World Cup as him—six.

It is a CV, which some in the NEUFC, with 12 players below 25, are in awe of. “The players respect me a lot and that is a good thing but sometimes it puts a fear into them and I don’t want that. I want them to come close to me so that we can do everything together,” says Gyan. But when they are on the field, “they listen to whatever I say.”

For a player who was part of the 2019 Cup of Nations, has represented Udinese, Rennes, Sunderland and was in Turkey till August, Guwahati would be an unusual port of call but Gyan says “it is part of my job.” He has travelled to the UAE, to China but explains that “everything depends on the player” even when a club wants him. It didn’t when Sunderland loaned him out to Al Ain in the UAE, “but at the end of the day, I went there and left a legacy.”

“That is what I want to do, leave a legacy. When I moved to China (Shanghai SPIG in 2015), there was a lot of criticism, but now a lot of good players are moving there. And I hope me being in India can open doors to more players. Because the league is getting stronger. But if somebody regards me degrading the league than we are not helping the league,” he says.

Boxing promoter
The conversation shifts from football because Gyan is also a promoter of boxing fights and will start an airline—a la Niki Lauda, the three-time Formula One champion who died last May.

“Yes, a lot of things are happening in my life. My boxer is in the United States now. He is No. 1 in WBO lightweight. He is preparing for a fight in January. We are trying to do the promotion there (in USA). I have a team that takes care of these things. When I am free, I try to be around.” No date has been set to launch the airline, that will be called Baby Jet, he says.

Gyan says he isn’t thinking about politics but didn’t rule out following in the footsteps of George Weah, a Fifa Player of the Year and Ballon d’Or winner, who became Liberia’s president in 2018.

“A lot of people close to me and many in my country have asked why I don’t get into politics. Because of the influence I have in Africa, they know I can do well in politics. For now, my mind is not there (because) I am not out of the game yet. But anything can happen in life.”

Gyan then brings the conversation back to his day job. Half-fearing he would disconnect, the conversation was quickly veered towards that missed penalty against Uruguay in the 2010 World Cup— one that cost Ghana a chance to be the first African team to make the semi-finals.

“Every day. It haunts me every day. I will never forget this. It has become part of my life. Till Ghana qualifies for the semi-finals because we had a chance and I blazed away (the shot grazed the horizontal and flew into the Johannesburg night sky),” says Gyan.

“Even when I stop playing, it will haunt me. Even when I am seeing football on TV and there is a penalty in a normal league game, it just pops into my mind. It is like, ‘I don’t want to see a penalty in football because it connects my mind to 2010’. What is keeping me going is that I am strong mentally.”

But was it difficult playing for Ghana in the immediate aftermath? “If you fail today, tomorrow might be your day so you need to continue doing it till you get it right. I try to prove people wrong. The only time you give up is when you die,” says Gyan.

So, would Gyan have handled the ball like Luis Suarez to concede the penalty with almost no time left on the clock and Ghana tied 1-1 with Uruguay. After a throaty laugh, Gyan says, “I would have done the same thing to save my country. He saved his. I was unlucky and he succeeded to go the next stage of the competition. It happened in a blink and you know, in a blink anything can happen. So, I don’t blame him.”

They met in the Premiership at Sunderland’s home, the Stadium of Light, says Gyan. Suarez was with Liverpool. “And he (Suarez) scored. The goal was amazing; he dribbled through the lines.”

Last December, a story broke that Gyan had filed for bankruptcy. He issued a quick denial. Asked about it, he says, “I am the centre of attraction; people don’t know what they are saying, so you need to laugh it off. Some people take such things personally. To me, this seemed so funny.”

Wesley Girls' brouhaha: We’ll cooperate with authorities to ...
16 minutes ago