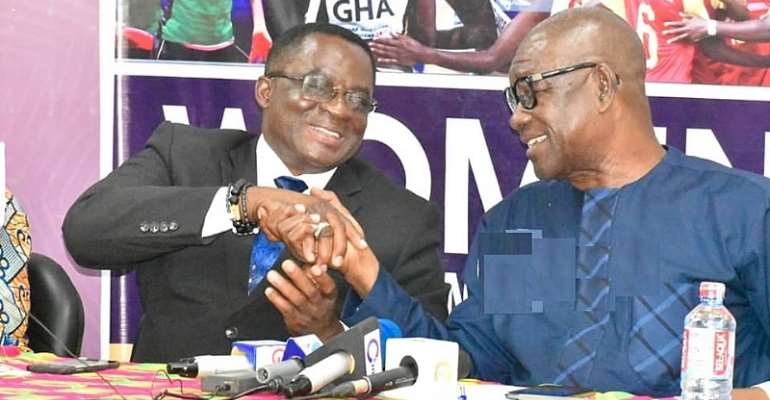 President of the Ghana Olympic Committee (GOC) Ben Nunoo Mensah has hailed one of his predecessors, Hon. Benson Tongo Baba formerly of the Ghana Prisons Service for his contribution to Ghana Sports.

Speaking at the maiden colloquium on empowering women to take up executive and administrative positions in sports, he praised B. T. Baba for acquiring the land at Amasaman for the GOC, which has become one of their most valuable assets, and promised to continue to develop the site which is now a community park to an international sports facility as required and proposed by the Association of National Olympic Committees of Africa (ANOCA).

According to Nunoo Mensah, B. T. Baba is one of the biggest sports icons Ghana has produced after the likes of the late Ohene Djan.

He said Ghana lost a huge opportunity to have a big say in world sports when B. T. Baba’s name was withdrawn from the Vice-presidential contest of ANOCA after the change of administration at the GOC.

According to Ben Nunoo Mensah, the legacies Baba at the GOC and Ghana sports is still unmatched and would continue to consult him.

B. T. Baba who has not made a public appearance for a long time was the chairman of the Women Sports Association of Ghana (WOSPAG) event at the media centre of the Accra Sports Stadium, and he charged women to be serious with sports and appealed to the sports authorities to promote physical education.

The Member of Parliament for Talensi Constituency in the Upper East region commended WOSPAG and hinted that the legislature of Ghana is very much concerned with the development of Ghana Sport, and has decided to support the industry.

He noted that the GOC is there to support the federations, and cannot carry the whole burden of sports, which is the duty of the government.

He called for the training of more physical education teachers and coaches, as well the investment in sports infrastructure so that more sportsmen and women can be produced.

B. T. Baba also called for the return of the inter- colleges sports programme that produced many student sportsmen and women who were selected into the Academicals and later became national stars.

He commended the Ghana Football Association (GFA) for a successful election which was free from interference and urged members of the GOC to support Ben Nunoo Mensah to succeed in his reign.

He also urged the GOC to work closely with the media to attract sponsorship from companies.

He later agreed to be a patron of WOSPAG, and help them in their programmes and activities.