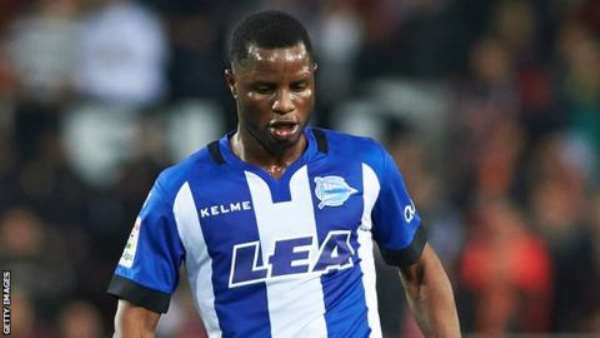 Ghanaian midfield enforcer Mubarak Wakaso was in action for his Deportivo Alaves side earlier this afternoon but ended up receiving a red card as they suffered a painful 3-0 defeat at the hands of Granada.

The Black Stars asset has been in fine form since the start of the 2019/2020 Spanish La Liga season and is currently ranked the 3rd on the roaster of players to have made more appearances in the ongoing campaign to highlight how important he has been to his club.

In a match week 16 fixture played at the Los Carmenes, Wakaso was handed another starting role to help Alaves seek for a win that will earn them all the 3 maximum points.

His day did not go as he would have wanted and was giving the marching orders on the 67th minute for a second bookable offense when Alaves was already trailing by two goals to nil to Granada.

Things went from bad to worse for Wakaso’s club late in the match when Victor Laguardia was also shown the red card.

Granada who will not care about the woes of their guests scored their goals courtesy strikes from Carlos Fernandez, Roberto Soldado, and Yangel Herrera.

Ghanaian international Mubarak Wakaso is now expected to serve a one-match ban and will not be available for Alaves’ next game in the Spanish La Liga against Leganes.