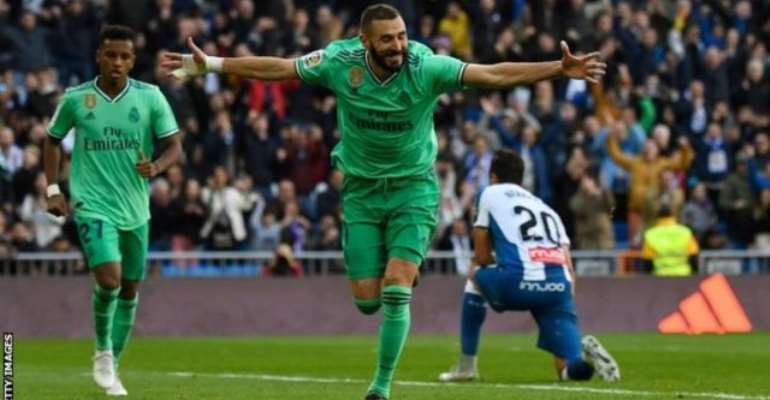 Karim Benzema scored and picked up an assist as Real Madrid recorded a comfortable win over Espanyol but were down to 10 men for the final stages after Ferland Mendy was sent off.

Benzema set up French team-mate Raphael Varane for the opener and made it 2-0 with just over 10 minutes to go.

The striker also wasted a huge chance in the second half, hitting it straight at keeper Diego Lopez from close range.

Mendy was shown a second yellow card in the 82nd minute for a rash challenge.

The victory moves Real Madrid three points clear of Barcelona at the top of the La Liga table before Ernesto Valverde's side take on Mallorca later on Saturday (20:00 GMT).

Real were comfortably the better team, although Espanyol did come close in the first half when Esteban Granero's header was palmed away by Thibaut Courtois, seconds before Vinicius Junior raced up the other end and forced a save out of Lopez.

The hosts squandered numerous chances to extend their lead before Benzema made it 2-0 - Vinicius having three shots on target, while Toni Kroos and Federico Valverde came close.

Brazilian Vinicius, 19, was a constant threat on the left, linking up with Benzema and causing problems for Espanyol's defence. He replaced Wales international Gareth Bale in the starting line-up, with the winger not in the squad after picking up a hamstring problem.

Real Madrid were also playing in an unfamiliar green kit - the first time they have done so at the Bernabeu - to show support for the COP25 climate summit in Madrid.