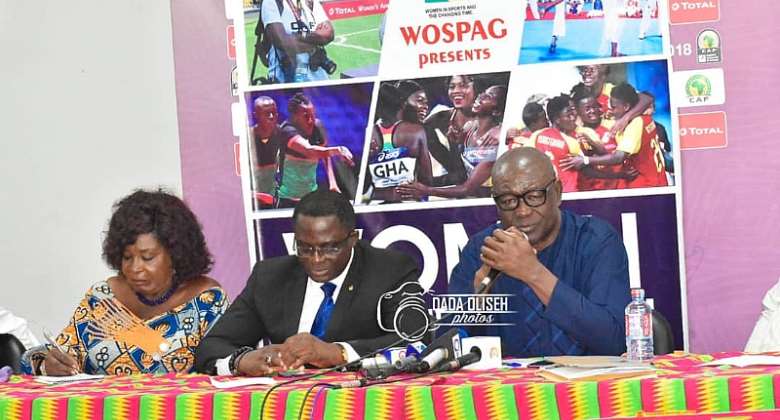 B. T. Baba who was chairman for the occasion adviced people in sports to partner the media if they want to succeed and urged the sports authorities to put up sports facilities as he was happy to know that there would be an Olympic size stadium in Accra to host the 2023 African Games.

Ben Nunoo Mensah said women need support to fund their events and programmes, but this challenge can be solved if they plan and prepare well as well as approach the right people.

He congratulated WOSPAG on their 25th anniversary and commended the executives for uniting for the programme to ensure a brighter future for women sports activities.

Mrs. Morton who is also race director of the Millennium Marathon and chief organiser of the Kiddie Mile Races urged women to be bold to take up positions whenever they get the opportunity.

The colloquium which is under the auspices of Women Sports Association of Ghana (WOSPAG), the Ghana Olympic Committee (GOC), National Sports Authority (NSA) and the Women In Sports Association (WISA) attracted many women sports executives and media.

The programme was under the theme “Gender advocacy and empowerment,” and was aimed also at bringing women within the sports fraternity together to equip them with knowledge of the tenets of the various sporting federations.

It is also to whip up their interest in taking up leadership positions within the federations which would enable them to influence decision making.

President of WOSPAG, Mrs Joyce Mahama, told the media it was time women rise up to take up sensitive positions within the sporting fraternity.

She said women need to be empowered and encouraged to take up leadership positions, adding that “I believe most of them shy away from big positions, it is now time for us to stand to the tests.”