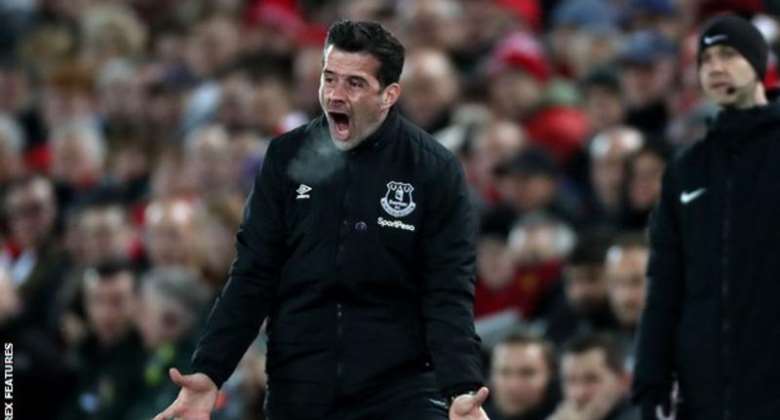 Everton manager Marco Silva faces the sack, with the club's board expected to decide his future on Thursday - and former boss David Moyes under consideration as an interim replacement.

Toffees majority shareholder Farhad Moshiri was scheduled to arrive in Liverpool on Thursday afternoon to confirm a decision on the future of the 42-year-old Portuguese after the 5-2 thrashing in the Merseyside derby against Liverpool at Anfield left them in the relegation places.

Silva has already survived one round of emergency talks among the club's hierarchy after the home loss to Norwich City on 23 November but it is increasingly unlikely he will be spared a second time.

He was asked about his future in the aftermath of Everton's eighth defeat in 11 games and said: "I am not the right person to talk about this situation. You are asking me and I don't have the answer."

The answer may be delivered on Thursday, with Silva, who has been at Everton since May 2018, not expected to be in charge for Saturday's game against Chelsea at Goodison Park.

Former Everton manager David Moyes has been considered as a potential interim successor, but the suggestion has sparked a largely negative reaction from supporters and it remains to be seen whether Moshiri and his boardroom colleagues ignore that and invite the 56-year-old Scot to return.

Moyes spent 11 years as Everton manager, and his return has been seen by fans as a retrograde step given his lack of success since leaving for Manchester United in 2013.

He was sacked at United and Real Sociedad and was in charge of Sunderland when they were relegated from the Premier League before having a short spell at West Ham.

It has been suggested that if Moyes does return he could bring another Everton old boy Tim Cahill back as his assistant.

Silva escaped the sack after the Norwich loss because Everton's hierarchy appreciated he has worked tirelessly and suffered injuries to key midfield players Andre Gomes, Jean-Philippe Gbamin and Fabian Delph.

Everton director of football Marcel Brands has backed Silva to date and has argued for stability, but he was seen in deep discussion with fellow board member Sasha Ryazantsev, a close associate of owner Moshiri, as they stayed behind in the Anfield directors' box at half-time on Wednesday after a shambolic opening 45 minutes.

It will be a blow to majority shareholder Moshiri, who was the main driver behind Silva's recruitment, even getting Everton involved in an acrimonious row with Watford as he tried to poach the Portuguese coach following Ronald Koeman's sacking in October 2017.

If Silva is sacked, he would be the fourth man to suffer that fate since Moshiri bought a share in Everton in February 2016, following Roberto Martinez, Koeman and Sam Allardyce.