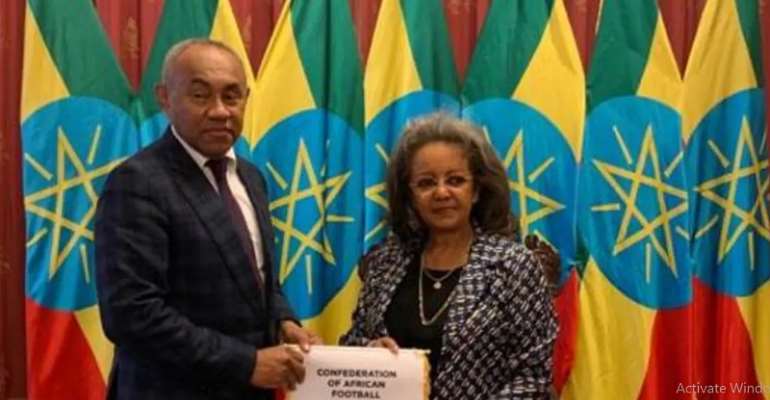 Kicking off his mission in the Ethiopian capital Addis Ababa, Ahmad undertook a visit of the city’s stadiums to assess their condition and conformity to CAF standards.

He then travelled to the Presidential Palace for an audience with President of the Federal Republic of Ethiopia, Sahle-Work Zewde.

Talks with President Zwede focused on the necessity to develop grassroots football in Ethiopia and in particular, the nurturing and development of football for girls and women.

The CAF President, accompanied by Fatma Samoura and EFA President Isayas Jira Bosho, shared his conviction that football brings about empowerment with the Ethiopian President. He also underlined CAF’s commitment to providing guidance, advice and practical assistance to the EFA to improve the safety and security of stadiums in Ethiopia, as well as leagues and youth competitions.

He said: “I’m honoured to be here today in Ethiopia, where CAF was first created and where there is such great love for football. I am committed to working hand in hand with our friends at the EFA to nourish football in Ethiopia and see grassroots competitions become feeders for national leagues as well as regional tournaments. I want to see an Ethiopian team competing in the Women’s AFCON in the near future and I am delighted by your support Madame President to encourage more women and girls to get involved in football in your great country.”

The audience with President Zwede also featured discussions on the 70th Annual FIFA Congress, which will take place in Addis Ababa this June. The event will see representatives from FIFA’s 211 Member Associations travel to Ethiopia to take part in the Congress which will be held at the headquarters of the African Union.

Speaking about the importance of football in Ethiopia President Sahle-Work Zewde said: “We look forward to welcoming FIFA and it’s members to Addis Ababa this coming June. Football is an important vehicle for change and progress and I am heartened by the commitment of the CAF President to assist us in developing football for men and importantly women in Ethiopia. I believe that with the support of CAF and FIFA, we can do great things to advance football and as a result society in Ethiopia.”

As the audience came to a close Fatma Samoura thanked President Zewde and her team for their support and enthusiasm for the FIFA Congress, underlining that for many of the 211 MA representatives attending it would be the first time that they would visit Africa.

Following their meeting with the Ethiopian Head of State. Ahmad and Samoura, accompanied by the EFA President, travelled to the headquarters of the Ethiopian Sports Ministry for talks with representatives of the Ministries of Sport and Culture respectively.

Discussions echoed those with President Zewde earlier that day, focusing on developing grassroots and women’s football in Ethiopia.

A meeting with the EFA’s Executive Committee followed where the CAF President emphasized CAF’s willingness to assist the federation in enhancing its current projects including the safety and security of stadiums and the importance of laying solid foundations with youth football so that senior leagues and competitions will be pools of talent in the future.