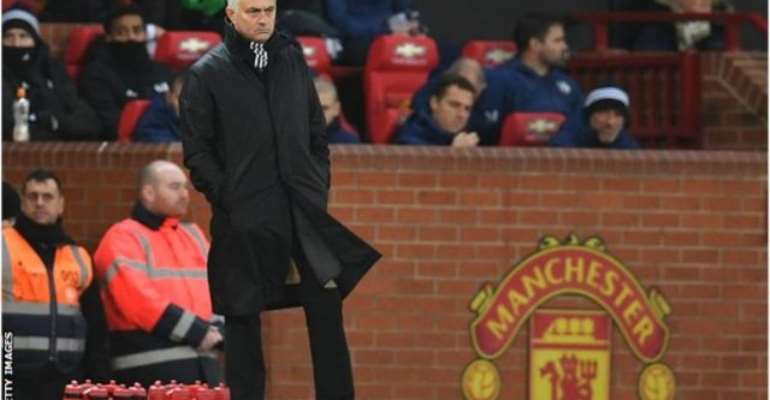 Jose Mourinho returns to the Old Trafford dugout on Wednesday almost a year after his last appearance, for a 4-1 win over Fulham on 8 December 2018 that proved to be his last victory as Manchester United manager.

Mourinho travels north with a Tottenham side re-energised since the departure of Mauricio Pochettino on 19 November, with three wins from three games, which has helped take them sixth in the Premier League.

England midfielder Dele Alli, in particular, appears to have been transformed by Mourinho's arrival.

In contrast, his old club are at a low ebb. When he walks into the visiting dressing room he was responsible for reducing in size during his time at the club, Mourinho will be preparing to meet a United side that are 10th in the table having won just four league matches this season and heading for their worst league finish since 1990.

So, who has benefited most from Mourinho's United exit? And what should Spurs fans be wary of if they look back at the Portuguese's time at Old Trafford?

Mourinho has stressed repeatedly nothing happening at Spurs at the moment is to do with him.

Few think he really means that. In any case, the noise that accompanies Mourinho assures he is centre of attention, even when it is not intended.

Praising a ball boy for helping Tottenham win their Champions League match against Olympiakos on 26 November, then inviting the lad into the home dressing room for Saturday's victory against Bournemouth, became about Mourinho. Alli's startling upturn in form is about Mourinho.

Sources at Tottenham say Mourinho has changed very little thus far. He occasionally stays in the overnight accommodation at Spurs' training ground but that will not become a parody of itself as the Portuguese's two-and-a-half-year residence at the Lowry Hotel in Manchester did.

However, tweaks have taken place.
Mourinho does not favour the high press Pochettino liked, so the training intensity will not be the same. Instead, work will be done on shape, both in and out of possession.

It is wrong to describe Mourinho as a defensive coach - but he is an organised one. As United experienced following Mourinho's dismissal, the chances are what Tottenham are benefiting now from is the introduction of a new voice, new methods and a fresh start.

This feels familiar - but has Mourinho changed?

Mourinho could not have done more than win his first three competitive games. Comfortable triumphs over West Ham and Bournemouth, plus a thriller against Olympiakos.

Spin back to the start of his United reign. Comfortable Premier League wins against Bournemouth and Southampton, followed by a last-minute Marcus Rashford winner at Hull.

It was game four that did not go to plan.
A home defeat by Manchester City was accompanied by a notable selection move from Mourinho. He substituted Henrikh Mkhitaryan at half-time. Mourinho, indirectly, called it "a bad performance".

Mkhitaryan did not start another league game for nearly three months. After he left United, the Armenian said trust with his manager had been broken.

The contrast with how Mourinho has handled Eric Dier over the past seven days could not be more marked. In the aftermath of the Olympiakos game, when he replaced the England midfielder after 29 minutes, Mourinho publicly apologised to the England player.

He put him straight back into the side for the Bournemouth game, when Dier completed the full 90 minutes.

Is this evidence of a more compassionate Mourinho or is he merely being expedient in his handling of a midfielder in the mould of those he has tended to rely on throughout his career?

A feeling it may be the former is reinforced by the positive impression the 56-year-old has left on the Tottenham staff so far.

At United, there was a sense of excitement when his arrival as Louis van Gaal's successor was announced only for Mourinho's football to be not much better than the dismal fare served up by the Dutchman - and with less charisma.

It took Mourinho's United seven games to hit double figures in terms of goals scored. At Tottenham, he has done it in three.

Harsh words - different agenda
Mourinho has never been scared of dropping a few verbal bombs. At United, they started the week after Mkhitaryan's early derby exit.

After another loss - at Watford - Mourinho identified Luke Shaw as a culprit, accusing the England defender of being 25 metres away from his opponent, rather than five, and therefore in no position to stop a cross that led to a crucial Watford goal.

Shaw started one Premier League game in the following five months. Mourinho has already admitted to using verbal motivation on Alli, asking him whether he had been playing for Tottenham over the past few months, or his brother.

The reaction has been phenomenal - although, possibly, getting more out of Christian Eriksen might be a bit trickier given the Dane's contract runs out at the end of the season.

Yet, while he spent nearly £400m on new players during his time at Old Trafford, Mourinho seems to have inherited a more rounded squad than he ever managed to put together in Manchester.

In Toby Alderweireld, Jan Vertonghen and Davinson Sanchez, he has three effective options in central defence, the position he was blocked from strengthening in his final year at United.

Alli is excelling in the number 10 role in much the same way Frank Lampard did - albeit from slightly deeper - when Mourinho first arrived in England from Porto in 2004.

And, while Harry Kane is not a Didier Drogba in physical terms, he scores more regularly than anyone at United since Zlatan Ibrahimovic's debut season was wrecked by injury in 2017 after the Swede had scored 28 goals in 45 games.

The spectre of Mourinho hangs over Solskjaer

If the reaction he received on his most recent visit to Old Trafford as a pundit for Sky Sports is any guide, Mourinho will get a positive reception from United fans this week.

After all, he did win two trophies and took the club to their highest league finish - second - since Sir Alex Ferguson retired in 2013.

United were sixth when he left, with the club privately saying there had been no improvement in results or style during his time in charge.

But the problem for his successor, Ole Gunnar Solskjaer, is that - after an initial surge - United have regressed under his management.

Sunday's home draw with Aston Villa leaves them 10th, with four wins and 18 points from their opening 14 games. In order to reach the 26 from 17 that wasn't enough to save Mourinho from the sack 12 months ago, Solskjaer needs to win his next three games, which includes Saturday's derby trip to Manchester City.

It is true that the popular Norwegian retains support inside and outside the club and that he is committed to picking young players - something Mourinho never convinced about, even if he spoke often about doing it.

But United's squad is evidently deficient. Without significant purchases in January, Solskjaer will struggle to reach the top six, let alone seal a Champions League place.

And no-one, no matter how popular they are, can survive in the cut-throat world of Premier League management if results continue to disappoint.