10 Things To Know About Rwanda-PSG Deal 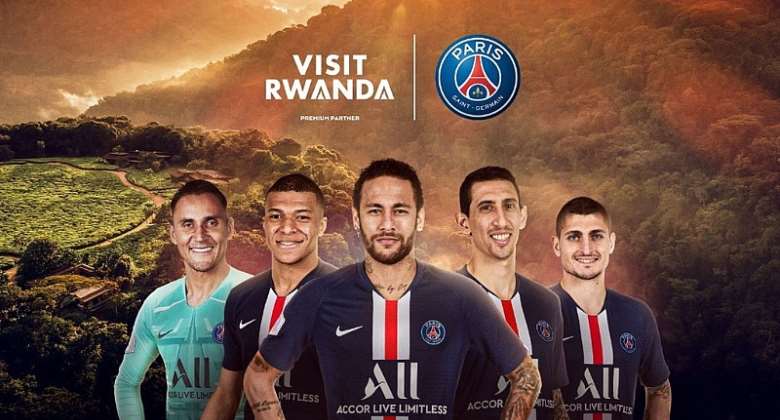 Rwanda and French Football club Paris Saint Germain (PSG) have announced a three-year sponsorship deal. This is the second partnership deal with a football club following on a three year deal with Arsenal FC in May 2018.

Following an interview with The New Times, Rwanda Development Board Chief Executive Clare Akamanzi gives insights to key aspects of the agreement.

Here is all you need to know about the deal;
1. What’s in it for Rwanda?
PSG is giving us another platform to take Rwanda to the world. That includes tourism destinations as well as promoting other Made-in-Rwanda initiatives such as fashion, arts and coffee and tea.

Rwanda is going to be the exclusive suppliers of coffee and tea at Parc des Princes, (PSG’s home stadium) starting next season. Rwanda is also going to showcase Rwanda’s brands at a week-long event in Paris. It is considered a lifestyle partnership because it covers aspects beyond football and tourism.

The other component is advertising Rwanda as a brand and 'Visit Rwanda' through backdrop banners. Rwanda will also have ‘Visit Rwanda’ on the shirts of female players and on the training kits for men. Rwanda will not have a sleeve deal as we do in the Arsenal deal.

The agreement also caters to football development where PSG will continue to nature and promote the young people who want to get into football and bringing facilities to support football. We will be having coaching sessions and mentoring of emerging players.

2. Why PSG? What’s its unique proposition?

It is a French market and is also appealing to the youthful population across the world. It is a fast-growing, vibrant and one of the most popular brands in Europe. It’s a lifestyle appeal brand.

PSG values appeal to the youth, make the partnership an ideal addition to the agreement with Arsenal. The French club's pursuit of excellence, vibrancy, and dynamism bode well with what Rwanda is working to achieve as a country.

3. How much is Rwanda paying for the deal?
Due to the confidentiality of the agreement, the financial details of the deal will not be disclosed.

4. What value does Rwanda get?
The value is twofold. One is brand awareness for local products. The second is revenue generation from selling Rwandan products and services to PSG's audience and the greater European market. Through the three-year partnership, opportunities for the private sector are set to expand.

5. How did we get here? Who approached the other?

PSG alerted Rwanda about the opportunity following the impact of the Arsenal deal. PSG has not been the only one to approach us. Other football and sports clubs across the world have expressed interest to work with Rwanda when they saw the partnership with Arsenal. Rwanda's values and those of PSG are in alignment and have a lot in common.

6. How did the Arsenal deal inform the new partnership with PSG?

Since the signing of the Visit Rwanda-Arsenal partnership, we saw a huge benefit. The partnership announcement generated 1,000 pieces of traditional media coverage and in the first two weeks of the partnership, global Google searches for ‘Rwanda’ were higher than the whole of 2017 and increased in the USA by 1,000%.

Before the announcement of the partnership, a survey of 20,000 Arsenal fans across 30 markets conducted by Hall and Partners found that 71% did not think of Rwanda as a tourist destination. A year on, 51% of respondents stated that the partnership made them more likely to consider Rwanda as a tourist destination. This demonstrates a shift in perception and understanding of the country.

Today, 142,000 Rwandans are directly employed in the tourism industry, up from 90,000 in 2017. Last year Rwanda received 1.7 million visitors to the country and we expect more this year. We are confident that this new partnership will bring even more benefits.

7. What sectors stand to benefit the most?
Tea and coffee. These industries should be getting ready to export. That is direct exports.

Anyone who drinks tea and coffee at the stadium will be served Rwanda sourced tea and coffee. Rwanda hopes that this will make it better known and lead to more demand and access to other markets.

The other industry is tourism; the entire value chain.

Then there is Fashion. Rwanda will work with PSG to select players in the local fashion industry who we will elevate and showcase to the world using PSG platforms.

The other is art, players in the creative industry such as Inema Arts should be getting ready. In addition to that, when Rwanda hosts Paris week, other local brands and industries can showcase their goods and services.

8. How will the impact of the deal be measured?

9. PSG is a Qatari owned club based in France, does it say anything of the ties with the two countries?

The deal is between the two parties because of value. Rwanda enjoys warm ties with Qatar and France and is looking at different joint investments

10. What happens next now that the deal is signed?

Local brands should get prepared. Their products need to appeal to the global market. The standards, quality, and uniqueness need to be thorough. When the PSG team came to visit Rwanda, they went around and saw products that they found to be unique. Some companies are ready for that, others need to keep working to be more competitive. According to RDB, at the moment, there is enough to take to the world.