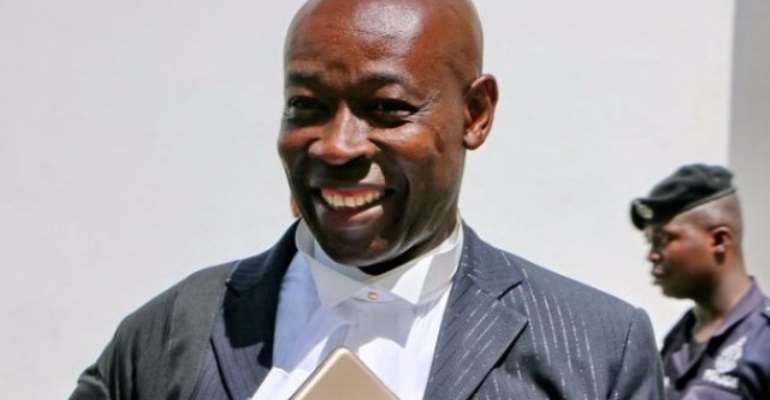 Legal expert and lawyer of the Ghana Football Association (GFA), Thaddeus Sory, has denied receiving full payment for the legal services he rendered to the association to secure their arbitration settlement fee from telecommunication’s outfit, Globacom Ghana.

Last week a $100,000 legal fee that was deducted from the $1m arbitration settlement fee by the erstwhile Normalisation Committee became the centre of heated controversy over who benefited from the said amount.

While Dr Kofi Amoah was reported to have paid the $100,000 to the lawyer for helping in getting the second tranche paid, Sory said he was yet to receive the said amount although his services was what the FA procured to negotiate for the settlement.

Speaking to the Graphic Sports in an interview last Friday, the legal practitioner said the association advanced part payment to him when the Nigerian telecommunication’s outfit paid the first tranche with the promised to settle the remaining once the rest of the amount hit the FA’s account.

In 2008, the GFA signed a five-year deal with Globacom to sponsor the local league with an initial $3m payment and an upward increment in subsequent years.

Following that, the FA confirmed receipt of $1.2m in 2012 and that appeared to be the last money Globacom would pay as sponsorship money, leaving an unpaid arrears of about $6.5m.

After unfruitful attempts to get Glo to honour its part of the contract, the GFA went to court to compel the telecommunications company to honour its obligation.

Glo, however, admitted that it had not been able to honour its contractual obligations due to financial challenges.

An agreement was reached to pay the $1.5 million in tranches within one year and during the first quarter of 2018, Glo paid $500,000 in fulfillment of that agreement.

Sory admitted receiving 10 per cent of the first tranche of the arbitration settlement money paid by Globacom to Ghana to the Ghana Football Association (GFA) but had not been paid anything afterwards.

He explained to the Graphic Sports in an interview that per the payment arrangement he was expected to receive a percentage of the money as and when it was paid but he had not received anything apart from the part payment.

"They were supposed to pay me my fees as and when Glo paid, so every tranche that Glo pays they will give me my percentage from it", he stated.

However, the lawyer at the centre of the negotiation, Sory, has denied receiving the full amount because he was unaware the Nigeria telecommunication outfit had advanced the final tranche of payment.

"I don't even know they have paid the rest and nobody has spoken to me about it", Sori stated

Meanwhile, a source at Glo said, the company throughout the arbitration dealt with Mr Sory and he was the one who stood in for the GFA when they reached an agreement with the arbiter in 2017.

“We dealt with Mr Sory throughout the arbitration and it was with him that the payment plan was made. We paid the first tranch of $500,000. Unfortunately when it was time for the remaining tranches to be paid, football activities were suspended and the GFA’s account was frozen, so we had to take some time before paying.

“We never reneged on the agreed plan. We had to make sure we paid to the right hands. There was no re-negotiation, we paid what had been agreed on with the arbiter and Mr Sory,” the source told the Graphic Sports.