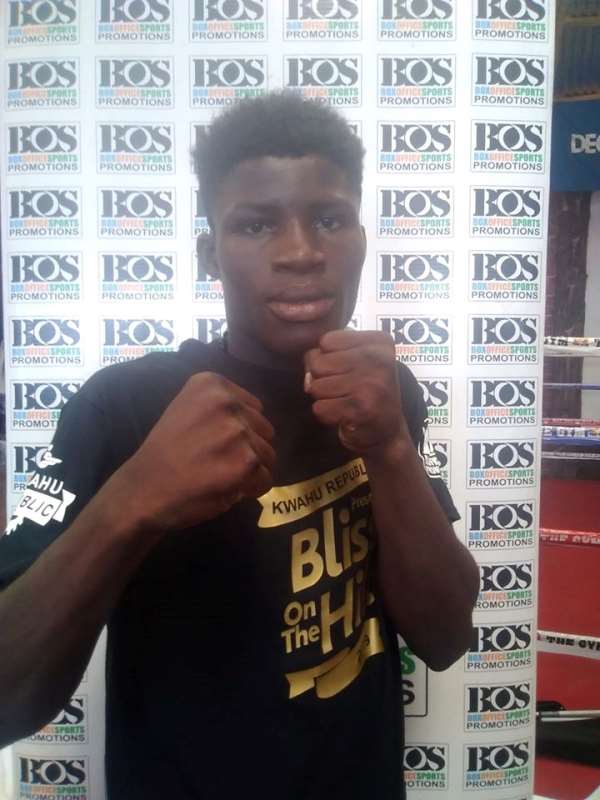 New boxing sensation, Alfred Lamptey aka ‘The New Sweet Pea’ recorded his third straight victory in style over the weekend at James Town in Accra.

Preparing for the ‘Bliss On The Hill’ show, Lamptey took on David Kotey who he stopped in the 3rd round at the Old Kingsway Ussher Fort, off the High Street in Accra.

Lamptey who is managed by Round 10 Boxing based in Dubai, as well as Box Office Promotions in Ghana, was the toast of the night as he punished his more experienced opponent before stopping him to the admiration of boxing fans.

According to Alex Ntiamoah Boakye, CEO of Box Office, they are building him to become one of the youngest champions, and very soon he would be taking on international fights.

Meanwhile, boxing prospect, Manya Plange, a former captain of the Black Bombers has been added to the list of crack boxers on the Bliss on the Hill promotion on December 26 in Abetifi, Kwahu.

Plange who has not fought for sometime thanked Box Office for giving him the chance to let his fans see him once again.

Other crack boxers on the bill are Bastie Samir, George Ashie The Red Tiger, Sherif Quaye, Michael Ansah aka One Bullet and Maxwell Awuku. The promoters said they will surprise boxing fans with a surprise.

Bliss on the Hills is a week-long entertainment and sports package put up by Kwahu Republic, Media Excel and Box Office to celebrate Christmas at Kwahu.