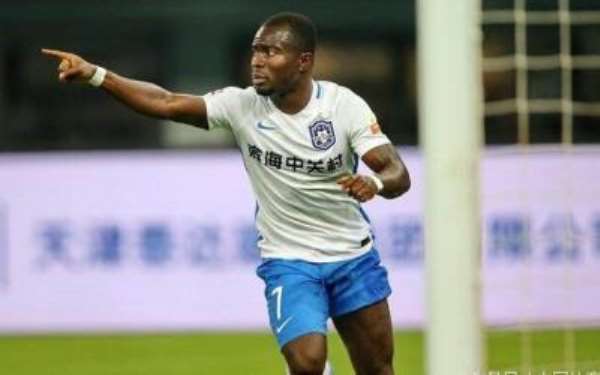 Ghanaian attacker Frank Acheampong has been named in the Chinese Super League ‘Team of the Week’ for the final weekend of the season for his outstanding display for his Tianjin Teda side over the weekend.

Teda welcomed Chongqing Lifan to their home grounds in a match week 30 fixture, to sum up, what has been a good season for the side.

The Ghanaian who was deployed in his favorite right-win position was all over the pitch and played a key role that resulted in the win.

Rating all the players of match week 30 in the Chinese Super League, Acheampong’s performance has been rated among the best according to WhoScored.com, handing him a spot on the ‘Team of the Week’ in the process.

He is on the team with superstars including Brazilian trio, Hulk, Oscar, Renato Augusto, as well as Sandro Wagner and Marko Arntautovic.

The Black Stars winger has been impressive all season and bows out with as many as 9 goals and 9 assists.

Below is the Chinese Super League ‘Team of the Week’ for match week 30.