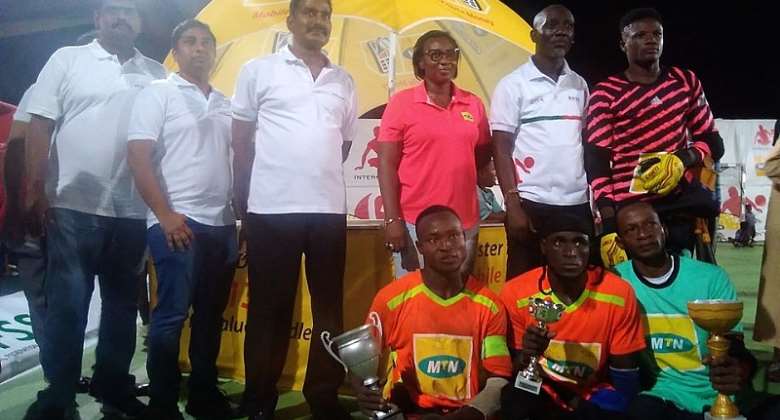 It was all fun and jubilation galore for players and supporters of the Accra Giants Skate Soccer Club after they had trounced the Ashanti Warriors 5-1 in the final game of the MTN Skate Soccer League.

For Gariba Sanni, the skipper of Accra Giants it was triple celebrations as he got his sweet revenge with a fantastic display that won him the most valuable player (MVP) and the best scorer (Goal King) with nine goals.

He set the stadium alive with the classic first goal and his team continued to pressure the Kumasi lads to result in a 4-0 lead at half time.

In the second half the Ashanti Warriors came back strongly with good goal keeping by Rabui Ali who was awarded the Best Goal Keeper as he save his team from conceding more goals, and the Accra boys also relaxed their game to end the game 5-1.

All the players were presented with MTN airtime and Binatone pressing iron each, while the most outstanding player got a music maker and fan in addition to his trophy.

Mr. Albert K. Frimpong president of the International Federation of Skate Soccer (IFSS) congratulated the winners and losers who put up a spirited performance. He called on Ghanaians to show love for the physically challenged and support them.

He also praised MTN and Binatone for sponsoring the final, and commended the GOC president, Ben Nunoo Mensah for gracing the event to motivate the players and officials.

Mr Guido Sopiimeh, Acting Chief Marketing Manager of MTN who performed the ceremonial kick off in his speech said he was delighted to witness the finals of this exciting game.

He expressed that since the first game was played in Kumasi, he has been looking forward to the final, to celebrate with the winners.

As partners, MTN is happy to have come on board to help the organisers and the players realise their dreams. It was an opportunity for us to further strengthen the positive relationship that exists between MTN and the people within our communities. We appreciate the opportunity we have to make a difference in the lives of this unique and creative people” he said.

Mr. Sopiimeh noted that Skate Soccer is one of such exciting ways to support the physically challenged while brightening their lives.

“The story of these skaters are amazing and typically resonates with MTN’s Leadership and relationship values. We are inspired by the tenacity and strength of these people. More importantly, we hope that with the growth of this sport, more people will be attracted into the teams which we hope will keep them meaningfully engaged” he added.

According to the Ag Chief Marketing Officer, another value of MTN which we cherish is Can- do.

“Indeed it is very heart warming and encouraging to know that you have embraced the fact that disability is not inability. By acknowledging this fact, you are able not only to discover your dreams but also inspire many people facing similar challenges in their lives.

“I can imagine how difficult it was to start this project and to secure funding for your activities which is why I congratulate the International Federation of Skate Soccer (IFSS) for championing your cause and helping you to identify your talent in this area.

“Together with you and IFSS, we hope that Skate Soccer will grow in Ghana and beyond and that in future you will win Gold at the Olympic Games. Yes you can!

We look forward to future partnerships that will be bigger and better than what we see today. Congratulations once again. Until we meet again at another exciting edition of Skate Soccer, I wish you all the very best and remember that at MTN ‘WE DEY FOR YOU” he explained.

D. Venu Babu, managing director of Interworld Products, suppliers and distributors of Binatone electrical appliances expressed his joy after the successful event, and said his company is proud to be associated with skate soccer.

He commended the players for putting up a competitive and spirited performance which made the fans very happy. He also thanked the media for the massive coverage.