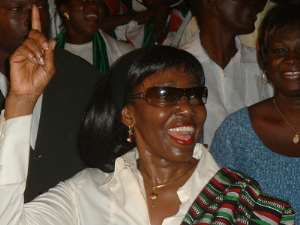 The European Union (EU) delegation in Ghana has debunked statements by the former First Lady, Nana Konadu Agyeman Rawlings, that the Union exerted pressure on the government for the restoration of courtesies to her husband former President Jerry Rawlings.

A source at the EU told the paper on Wednesday that the Union does not meddle in internal politics of a country.

The source, which described Nana Konadu's comments as unfortunate, said the EU has been mindful of internal affairs of any country and that neither the Brussels, headquarters of the EU nor its Ghana office would descend into the local political area.

He said it is also untrue that the government was coerced by the EU to restore courtesies to the former president.

The former First Lady on Wednesday said the government was coerced to restore the courtesies to her husband because of pressure from the EU, the African Union and the United Nations.

She was reacting to a statement by the Foreign Minister, Nana Addo Danquah Akuffo Addo concerning the restoring of courtesies and privileges to the former President.

The EU source however commended government's decision, describing it as a mark of good leadership and hoped it will lower the tension in the country.