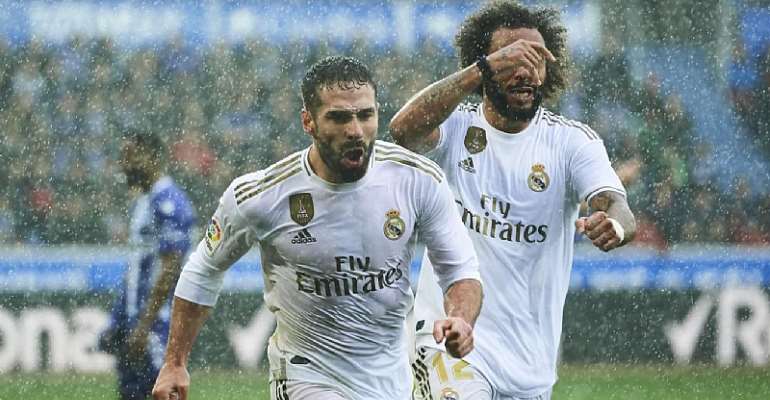 Dani Carvajal sent Real Madrid to the top of La Liga with an untidy winner in a 2-1 away victory over Alaves in testing conditions.

Zinedine Zidane handed Gareth Bale his first start since the controversy surrounding the flag displayed while on international duty with Wales, with Alphonse Areola and Eder Militao also coming into the Real Madrid lineup.

This was a slog of a match in trademark Basque country rain. It wasn’t until the 52nd minute that the deadlock was broken through Sergio Ramos, who drifted away from his marker to glance home a Toni Kroos freekick.

But Ramos was at fault for the Alaves equaliser, needlessly throwing an elbow into the face of Joselu, giving the referee no choice but to point to the spot. Lucas Perez scored his eighth goal in nine matches to level things.

Parity only lasted four minutes, though, as Carvajal bundled home a rebound from close range after Isco had struck the post with a header. The victory takes Real Madrid three points clear at the top of La Liga ahead of Sunday’s fixture between Atletico Madrid and Barcelona.