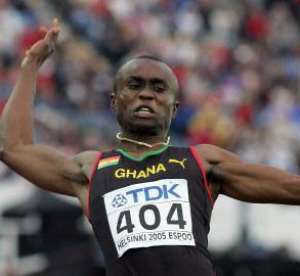 Ignisious Gaisah won Ghana's second medal at the Commonwealth Games in Melbourne. He won the Men's Long Jump at the Melbourne Cricket Ground (MCG), with a leap of 8.20m.

This is the second gold Gaisah has won this year, after taking the gold in the World Indoor Championship

Gaisah claimed the event ahead of silver medallist Gable Garenamotse of Botswana who jumped 8.17m, with Australian Fabrice Lapierre taking bronze with a distance of 8.10m.

Garenamotse took the early lead in the Final after jumping 8.15m with his first attempt.

Illegal jumps from Garenamotse and Lapierre in the last round guaranteed Gaisah the gold, though he also failed to jump legally on his final attempt.

This was Garenamotse's second Long Jump silver, matching his Commonwealth Games effort in Manchester in 2002.

For more results, visit the Athletics Schedule and Results section of this Website.