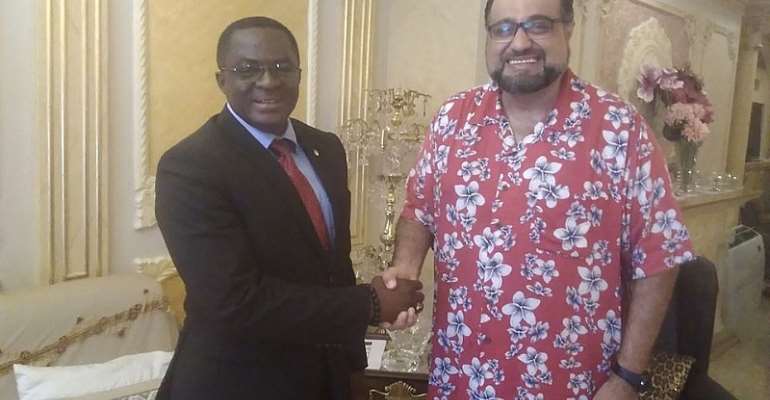 The first-ever Wheelchair Minigolf League in the world has been opened at the Ceasar’s Court at Ridge in Accra.

The event which took place on Wednesday, November 27, 2019, at the plush minigolf house was graced by the president of the Ghana Olympic Committee GOC, Mr Ben Nunoo Mensah as a special guest and Mr Saka Akwei, deputy director-general of the National Sports Authority (NSA).

Also in attendance were lawyer Ester Akua Gyamfi, executive secretary of the National Council of Persons with Disability, Nii Adote Din, second vice president of the GOC, Fred Assor, chairman of the Para Athletes Commission and Mr. Dzigbornu of the Accra Rehab Center.

Mr. Tallal Fattal, president of the Ghana Minigolf Federation who doubles as the president of Africa Minigolf said it is a remarkable achievement for Ghana to be the first nation in the world to organize a wheelchair minigolf league, and promised that their humble beginning would be great in the near future.

He urged the physically challenged not to be ideal but come out to join the club and socialize, as well as engage in sports to earn something and make contacts.

He said the main programmes of Ghana Minigolf would go side by side with the physically challenged event and there are fantastic prizes for winners and travelling opportunity for those who would be selected for international competition.

Tallal Fattal, who is known to have come up with concepts like the Morten Boxing League and MTN Soccer Academy urged corporate Ghana to support physically challenged sportsmen and women.

He said other programmes to be climaxed with an awards ceremony have been lined up, and he thanked the media for supporting the new sport.

Mr. Ben Nunoo Mensah commended the president of Ghana minigolf and urged him to apply to join the GOC as the federation has been doing marvellous things, such as producing the African champion and other feats.

He called on the government and parliament to pass legislation that would encourage people with disabilities to do sports as they are capable of winning more medals for the nation at international sports events.

The GOC president expressed that physically challenged people are special and a blessing, so they should be aided, however many people are limited and many things, so they must be encouraged to be up and doing to realize their God-given talents and skills.

He promised that the GOC will back them and promote their activities.

Mr Saka Akwei commended the executives of Ghana Minigolf and the wheelchair players hoping that they would be recognized and fully incorporated among the sports associations under the NSA and GOC.

Madam Ester Gyamfi who also represented the Ministry of Social Protection and Gender urged the players to be disciplined and abide by the rules and regulations of the sport and aim high to win laurels for themselves and the nation.

The clubs competing in the 2019 wheelchair Minigolf League are Raiders, Amazing Putters (AP), Hope Putters, Victory Putters and Elwils Putters. It has been endorsed by the African and world Minigolf bodies.