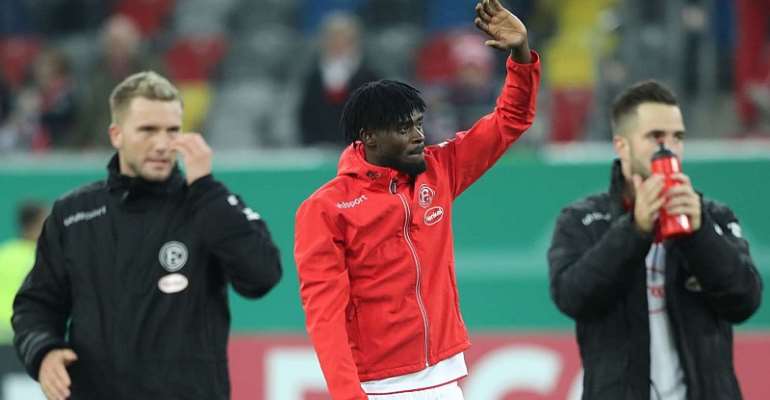 Ghana international Kasim Nuhu Adams revealed that it would be a dream come true to play in the Premier League in the future.

The 26-year-old is currently on loan at German side Fortuna Dusseldorf from Hoffenheim.

Nuhu has been linked to Premier League sides Newcastle United and Tottenham Hotspur.

But according to the former Ashgold centre back, he will not reject a move to the Premier League.

“It [Premier League] is one of the leagues I cherished a lot growing up in Ghana," Adams told Footballmadeinghana.

"It will be a league that I would like to play in in future.”

In 2018, Adams joined Hoffenheim from Swiss side Young Boys on a five-year deal.

Last summer, he headed out on loan to Dusseldorf after helping Ghana to a Round of 16 berth at the Africa Cup of Nations.

"For Hoffenheim, I wanted to give my everything for them after Afcon because they bought me for €8 million," he added.

"I wanted to give everything for them this season. But things were not how I wanted it because the coach was telling me a different story.

“Going to Fortuna Dusseldorf, a certain Lutz is there, and he is taking care of everything. The club received me very well - the fans, Lutz and the coach.

"The coach keeps on talking to me. This motivation from the coach and sporting director keeps me going week in and week out.

"I will say going to Fortuna Dusseldorf is one of the best decisions I have made."

Adams has so far made eight league appearances for Dusseldorf, scoring once.