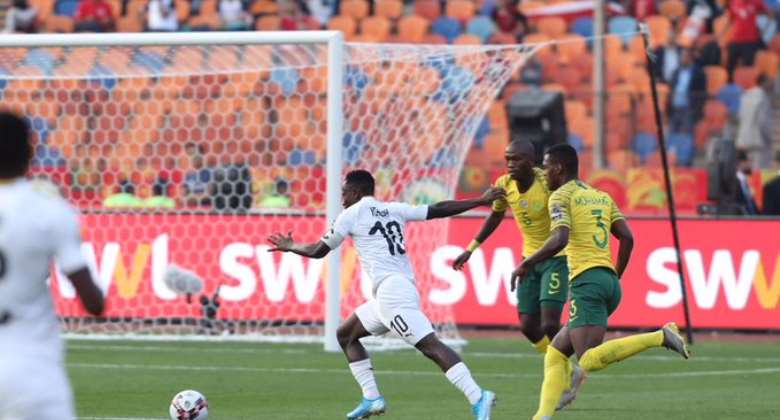 The Black Meteors of Ghana have this afternoon suffered defeat at the hands of South Africa on penalties in a third-place match of 2019 edition of the CAF U-23 Africa Cup of Nations (AFCON) tournament.

With both countries seeking to clinch the last qualifying spot to the 2020 Tokyo Olympic Games, they started off the match with an attacking mindset as the respective attackers bumped forward.

The pulsating start to the game saw a lot of chances being created but it was the South Africans who took a deserved lead after just 15 minutes into the match.

A good attacking run from Singh took a wicked deflection from Ghana defender Habib Mohammed and into the back of the net.

Now in the driving seat, the side grew in confidence and went on to create a lot of chances. They, unfortunately, wasted all the opportunities and ended the first half with just a goal to the good.

Ghana coach Ibrahim Tanko made one change at the break to introduce Issah Abass into the match in place of captain Yaw Yeboah who played through injury in the first half.

Five minutes after the recess, a thunderbolt striker from winger Evans Mensah ended up in the back of the net to restore parity for the Black Meteors.

The South Africans quickly added some urgency to their play and piled instant pressure on Ghana until they took the lead for the second time in the match through Kamohelo Mahlatsi just a few minutes after he was introduced into the game.

A resilient showing from the Ghanaian side saw them drawing level for the second time in the match on the 85th minute with striker Samuel Obeng netting the crucial match.

South Africa went on to win the penalty shootout at the end of the 90 minutes as they converted six of their kicks against Ghana who fell short after scoring 5 of theirs.

With the third-place decided, host nation Egypt is set to lock horns with Cote d'Ivoire in the finals this evening.